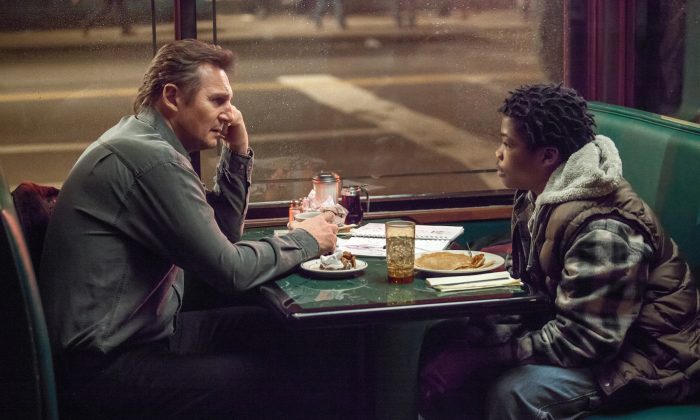 Liam Neeson and Brian “Astro” Bradley in "A Walk Among the Tombstones." (Atsushi Nishijima/Universal Pictures)
Entertainment

Film Review: ‘A Walk Among the Tombstones’

An Eerie Thriller, Sophisticated but Lifeless
By Victoria Ku

Sitting through “A Walk Among the Tombstones” is a battle. A monotonously violent production based on the mystery series by Lawrence Block, it drags you through multiple rounds of gunfire but ultimately leaves you mentally wounded and without answers.

Matt Scudder (Liam Neeson) was one of New York’s finest. He loved what he did, and his days were routine. He locked criminals away and stopped by his local bar, newspaper in hand, for his usual complimentary coffee plus two shots of whiskey. That all changed one day when his intoxicated pursuit of a gang of robbers caught a young girl in a tragic crossfire.

Flash forward to 1999. Scudder is attending Alcoholics Anonymous meetings when he is not working small cases as an unlicensed private investigator for gifts in return.

News of a drug dealer’s kidnapped wife puts Scudder in vigilante mode. Patterns show the targets to be the wives of drug dealers. Scudder tries to narrow down the serial killers, whose gruesome mode of murder reveals them to be seriously disturbed psychopaths.

On his hunt, Scudder encounters TJ (Brian “Astro” Bradley), a homeless precocious pre-teen who sleeps in the library. After using his Internet savvy to help Scudder find some leads, TJ decides to tag along as a mystery-solving sidekick.

Director Scott Frank is the man behind the somber ambiance of “A Walk Among the Tombstones,” a stark contrast from his warm and cuddly puppy film “Marley & Me.”

Set in gritty 1990s New York City, the villains in “Tombstone” do their bidding via pay phones. Scudder uses microfiche and physical files, and everyone fears the pending Y2K.

Unlike Neeson’s famous “Taken” action flicks, “Tombstones” takes its time. Neeson seems comfortable in his textbook role of rogue detective. It fits his résumé. But nothing makes Scudder special—at most, he is just more observant than the rest of us.

However, Scudder and TJ share some better moments. Neeson and Bradley have a genuinely great dynamic onscreen, and Scudder plays a fatherly figure in TJ’s life. Their relationship adds a delightful layer to the film and some depth to Scudder’s character.

A few scenes were unnecessarily graphic and creepy—which is expected, but relief from the violence is rare. Each gunshot seems to be purposely pronounced and might leave you cringing further into your seat. Despite the grimness, the noir undertones of the film contribute to the thematic sophistication of the cinematography and screenplay.

Given all the time the film takes and the fact that it’s supposed to be a mystery, director Frank left a major loose end. Our villains, who are enshrouded in shadows for the majority of the film, never seem to have a motive. Their résumé of butchery plays them up to be such big baddies, but they are revealed to be no more than a disturbed version of Bert and Ernie. It is strange that there is never a hint at what drove the psychotic and sadistic duo to this point. It is doubtful that Frank or the screenwriters know either.

The bottom line? “A Walk Among the Tombstones” won’t stun you, nor is it terrible. It is actually a mature and intelligible thriller for its genre. Frank does give us a chance to take the film as a whole seriously, if you don’t mind blood and unknowable motives.