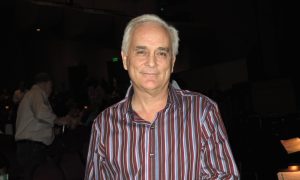 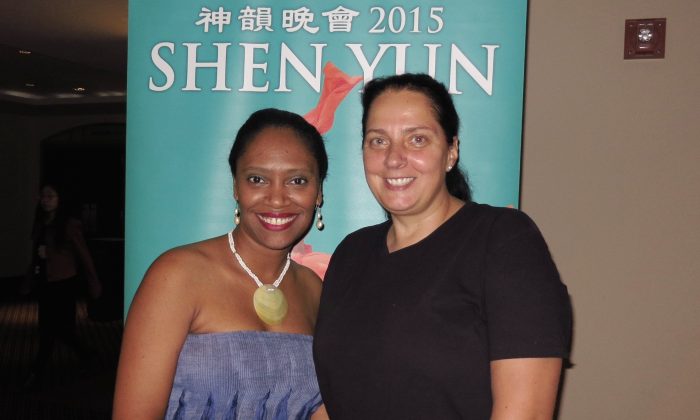 Diaky Diaz and Dr. Bettina Wolff, film producers and co-founders of the Artivist Film Festival, felt touched by Shen Yun’s opening-night performance at the Mahaffey Theater on April 3. “I wanted to see this for many years,” Ms. Diaz said. (Sally Sun/Epoch Times )
News

ST. PETERSBURG, Fla.—Diaky Diaz and Dr. Bettina Wolff, film producers and co-founders of the Artivist Film Festival, were touched by the opening-night production of Shen Yun Performing Arts at Mahaffey Theater at the Duke Energy Center for the Arts.

I wanted to see this for many years.
— Diaky Diaz
“I produce films and film festivals, and I am very grateful to be here today and experience this,” Ms. Diaz said. “It is wonderful to see not just the Chinese culture and the history, but also the struggles that they [the Chinese people] are currently experiencing.”

Shen Yun embraces the universal language of dance and music to tell heroic tales while taking theatergoers on a journey through 5,000 years of ancient Chinese culture.

Two of Shen Yun’s dance-based stories are contemporary, as Ms. Diaz mentioned, and demonstrate how the Chinese communist regime, which is officially atheist, has all but destroyed traditional Chinese culture—along with its art, history, and spirituality.

While holding onto its philosophy of struggle, the regime attempts to block Shen Yun in its mission to revive this divinely inspired culture. For example, a Shen Yun performance cannot be seen in China today.

Dr. Wolff, a psychologist, said she understood this struggle, as she was raised under communist dictatorship in East Germany: “I think it is very important to raise awareness and educate the public around the world, and get people also more involved.”

Ms. Diaz and Dr. Wolff are both committed to human rights. In 2003, they co-founded Artivist, the first international film festival dedicated to addressing human rights. The festival since has received public endorsements from the United Nations and Claes Nobel of the Nobel Peace Prize family.

Ms. Diaz said: “What is beautiful about this show is that it addresses the human rights violations, but it also shares the artistic experience and history of China, so I think it is just a beautiful combination. I am so grateful I came.”

I am so grateful I came.
— Diaky Diaz
“I wanted to see this for many years,” she said.

Ms. Diaz said she was touched by the dance pieces centered on the theme of persecution for spiritual beliefs—specifically the fundamental principles of truth, peace, and compassion.

One of the performances she referred to told the contemporary story of Falun Gong, the peaceful meditation discipline that has been persecuted by the Chinese Communist Party since 1999. Referring to Falun Gong, Ms. Diaz said, “But it is good to see the movement is growing.”

Viewing the performance through a producer’s eye, Ms. Diaz said: “The production is unbelievable—the quality of the production. The projection of the background—it is like a virtual reality. You see the video [the animated digital backdrop], how it connects with the real people. It is like a three- dimensional production. It was beautiful. I was really amazed and impressed.”