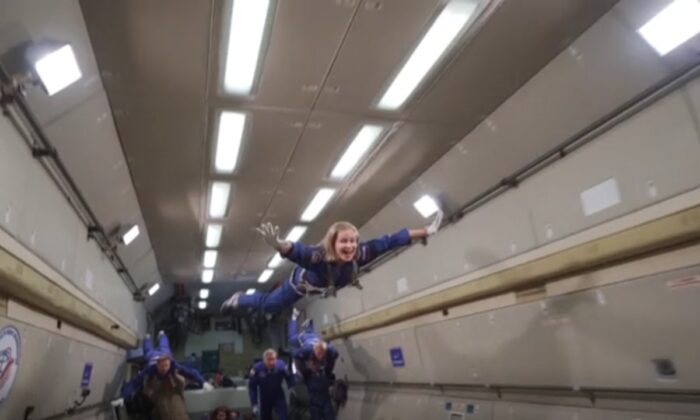 They look like any crew getting ready to travel into space. But only Anton Shkapleov is actually a real astronaut. By his sides are actress Yulia Peresild and film director Klim Shipenko. They will soon be undertaking the job of a lifetime—filming a movie in space.

They will spend 12 days flying above Earth to make the feature-length production. And excitement for the mission is building.

“For the past three months, we have been plunged into this wonderful world. It was hard, it was difficult, no time, no time for sleep. There was time for art, but less than when you are preparing for shooting on Earth,” says Klim Shipenko, the film director.

“Life has changed, of course, Space changes lives, it cannot be otherwise.”

The drama is about a doctor who is sent to Space to perform urgent surgery on an astronaut.

But before the crew got the go-ahead to board a shuttle to the International Space Station, they had to complete a grueling three-month training program.

There was a tough selection process including rigorous medical tests, learning the basics of Space survival, training in zero gravity, centrifuge and vibration tests, and practicing for in-flight emergencies.

“Despite all difficulties during this not easy path, this is very interesting, and it is a huge satisfaction and even a thought that it could really happen is beautiful,” says actress Yulia Peresild.

Thousands applied for a chance to film in Space. But only Peresild and Shipenko will be blasting off.

They have emergency backups—DOP Aleksei Dudin and actress Alena Mordvinova—in case something prevents them from taking their seats on the shuttle.

The space-bound film crew will have Anton Shkaplerov as their commander. While he’s an experienced astronaut, he will also do some acting in the movie. So far he’s been impressed by his novice crew members’ hard work.

“We trained together for a month and a half. Before, the guys were studying the theoretical basis of survival, flight during zero gravity, in other words, they touched as close as possible upon the future space flight,” he says.

“For the month and a half, we had a huge number of trainings at the station and on the spacecraft. The guys showed themselves in the best way, it is evident that they have a calling, and they want very much for this space experiment under the name Challenge to be implemented at the best level, best international level.”

Each crew member of the “Challenge” project will have multiple roles in space.

Astronauts will temporarily become actors, the director will act as a DOP, the actress will be a costume designer and make-up artist.

The movie will be called Challenge and is a joint production of Federal Space Agency Roscosmos, and Russian state TV Channel One.

The crew will continue preparations for the flight at the Baikonur Cosmodrome in Kazakhstan. The mission is set to be launched on Oct. 5 2021.