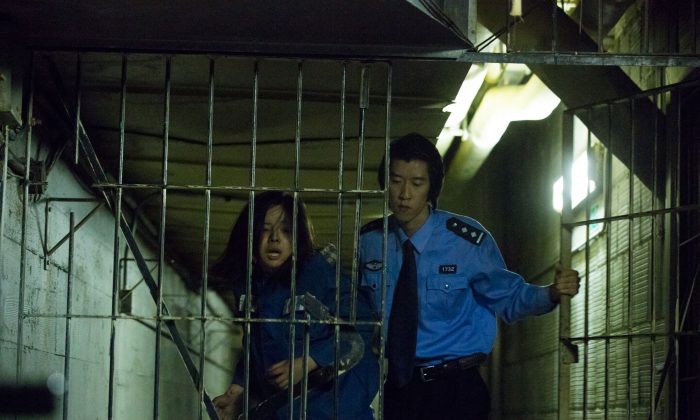 LONDON—Chinese-born Canadian actress Anastasia Lin is high on China’s most-wanted list. After being crowned Miss World Canada in 2015, instead of pursuing a glamorous life as a beauty queen, she chose to speak out about the human rights abuses in her native country.

On Sept. 6, she was invited to Westminster for the British premiere of her new film, The Bleeding Edge, a narrative thriller depicting the horrors of China’s lucrative forced organ harvesting industry. The film was screened in the House of Commons not long after Prime Minister Theresa May travelled to the G-20 summit in Hangzhou, China.

The 26-year-old actress has chosen to star in films that shed light on human rights issues in the communist country, and because of this, American producers have told her that she is most likely “blacklisted” in Hollywood.

Yet the harrowing story portrayed in The Bleeding Edge, about the state-sanctioned harvesting and selling of organs from prisoners of conscience, is based on true accounts. The victims are Tibetan Buddhists, house Christians, Uighurs, and practitioners of Falun Gong.

“I believe an organ is meant to be a gift from one human being to another. It can’t be given forcibly, because the person who is being given the organ also becomes the victim,” Lin said following the film screening.

With virtually no organ donation system in China, but an unusually high number of organ transplants, the disparity in numbers provoked researchers to look into the topic over a decade ago.

Ethan Gutmann, who has done extensive investigations on China’s illegal organ trade, found that the main source of illegally harvested organs is from practitioners of Falun Gong, a traditional Chinese spiritual practice that has been outlawed by Chinese authorities since 1999. It is thought that hundreds of thousands have become prisoners of conscience across China.

“Clearly the [Chinese] transplant system has grown in harmony with the incarceration of Falun Gong,” Gutmann said.

Gutmann’s most recent research found that organ transplants in China are exponentially higher than the country’s “official statistics” of 10,000 to 20,000 per year. The research, published as “Bloody Harvest/The Slaughter: An Update“, found that since 2000 there could have been an estimated 60,000 to 100,000 transplants taking place in China, per year.

Lin, who practises Falun Gong, is touched by the courage of those who are oppressed in China, but still hold true to their belief. “They are the courageous ones,” she said.

“It’s these people who have ended up in jail, not because they have done anything wrong but because of the system,” said Lin.

She hopes the film will raise awareness of the issue of forced organ harvesting in China and is urging the international community to take action.

Earlier this year, she testified at the UK Parliament about the persecution of religious minorities and the practice of forced organ harvesting. She has also previously testified at a US congressional hearing on religious persecution in China.

The beauty queen was denied entry to compete in the Miss World Finals in 2015, which was held in Sanya, China, and was declared a persona non grata by Chinese authorities. But she’ll be representing Canada in the 2016 beauty pageants, which will be held in Washington DC later this year.