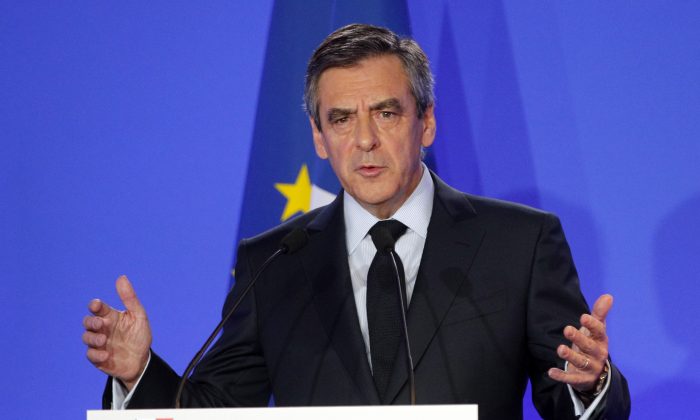 Fillon Refuses to Drop Out Presidential Race Despite Scandal

PARIS—François Fillon firmly refused on Monday to drop out of the race to be France’s next president despite an investigation into whether well-paid political jobs he gave his wife, son and daughter were genuine and the drop in his status as favorite in the April-May voting.

The man who served as prime minister from 2007 to 2012, the chief workhorse under then-President Nicolas Sarkozy, has long had a reputation as low-key, reliable and standing for moral rectitude, making the corruption scandal particularly shocking to his party, supporters and the French as a whole. On Monday, he scrambled to save his candidacy.

“I have nothing to hide,” Fillon told a news conference aimed at stopping the blood-letting and any conspiring within his conservative party about who might replace him as candidate. “All acts described (in the media) are legal and transparent,” he said.

He apologized for employing his wife, noting that it is not illegal and he is not the only politician to have done it, but acknowledging that the practice was clearly losing favor among the French.

Prosecutors are trying to determine whether family members actually did the jobs of parliamentary aides that they were paid for. The preliminary probe involves suspicions of embezzlement and misappropriation of public funds.

Fillon’s popularity has dropped in the past two weeks following allegations by the Canard Enchaine newspaper that his Welsh-born wife Penelope was paid 830,000 euros ($900,000) over 15 years without doing anything to earn the salary. The Paris prosecutor’s office on Thursday expanded its investigation to include Fillon’s son and daughter.

French politicians are allowed to hire family members as aides as long as they actually do the jobs for which they are paid.

Some conservative lawmakers want him to step down to improve the party’s chances of winning France’s presidential election. The first vote is on April 23, and the top two finishers compete in a runoff on May 7.

Clearing the table, Fillon laid out for reporters in some detail his own facts about the accusations.

“They call this job fictitious,” he said, laying out the ill-defined duties of parliamentary aides who work “in the shadows.”

Fillon and his family live in an elegant manor in the Sarthe region southwest of Paris. To bolster his reputation he detailed the worth of the building—750,000 euros—and other holdings, and said he does not have to pay the tax on fortunes demanded of the wealthiest. Fillon said he was publishing his assets online Monday night.

Fillon said the scandal grew out of a political conspiracy to take him out of the race, and make it a face-off between far-right leader Marine Le Pen, also a leader in early polls, and centrist Emmanuel Macron. However, he did not say who would be behind such a plot.

“Nothing will change my mind” about running, Fillon said. To members of his own The Republicans party who would like to push him out, he said twice, “I’m not the candidate of a party” but of the French people.

On Tuesday, lawmakers in Fillon’s party hold their weekly meeting, a likely place to examine the fallout from the scandal. There is no procedure in place to put aside his candidacy, however, and no ready replacement for Fillon.

Socialist President Francois Hollande is so unpopular that he decided not to run for a second term.