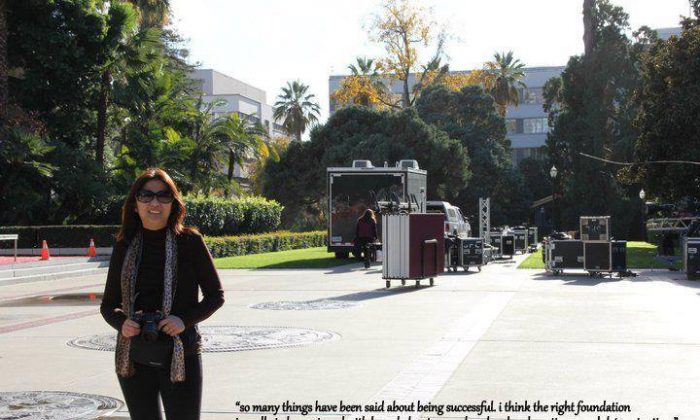 CANADA —  Fe Oller Gatus, the newest fashion guru in town, has been hitting the Canadian entertainment scene with her new found love — the world of beauty, music and fashion. Gatus migrated to Canada from the Philippines more than five years ago to finally follow her heart’s desire. She previously worked as a career executive officer in a Philippine government financial institution and also owned a fashion boutique at the same time. She currently works as a radio host at Radyo Filipino’s Pinoy Link located in Toronto and she is also an international freelance makeup artist, fashion consultant, artist developer and a voice coach rolled into one.

It wasn’t an easy decision, but, when her mentor asked her a simple question “What do you really, really love to do? Not just like?”, she paused and realized that her boutique had been her main inspiration to uncover her lifelong identity battle. This made her realize that “fashion was her passion”. Likewise, Gatus has been singing since she was 6 years old and this became the main theme in most of her fashion shows — “Music & Fashion”.

Ms. Gatus has a very hectic life in Canada but she enjoys every minute of it. She has been very busy with photo shoots, fashion shows, and even mini-concerts. As a senior consultant of a cosmetics company and a certified artist developer, she was able to train aspiring song artists and fashion models, to get their foot in the door to the Canadian entertainment industry. Gatus added “A makeover should upgrade a woman’s femininity, not downgrade it. To me, a woman should project a sexy but neat, elegant and dignified image. I enhance a woman’s appearance not to simply make her look and feel good, but to make her leave an impression that women should be given utmost respect, be treated as precious gems and not just cheap commodities. Women are indeed, treasures! They make this world brighter, happier and more exciting. Can you imagine a world without feminine touch ? Ahhh… definitely so dull and boring”.

In an interview with Gatus, she mentioned that a guest was watching her do a makeover asked her how she was able to determine which colors in her palette would look good on her models, she simply replied “All based on my instinct.” the guest smiled and said “You are truly an artist —  just like a painter who keeps on mixing colors until she eventually comes up with a perfect work of art.”

Some of Gatus’ fashion shows include “Music & Fashion 1, 2 and 3” back in March 2012, December 2012 and May 2013, respectively. The most recent fashion event she facilitated was the “Scarves of Hope” which was dedicated to the children of India back in November 2013. Gatus donates part of the event proceeds to different charities. “I help SOS Children’s Villages in Cebu and Davao, and I also do feeding programs in small communities in Davao City” Gatus added.

She is planning on holding a spring fashion show event in New York  City around April of next year. The date is still tentative but further details will be announced soon.

Radyo Filipino Toronto’s Pinoy Link runs from 10-11pm est every Wednesday at AM 1610.