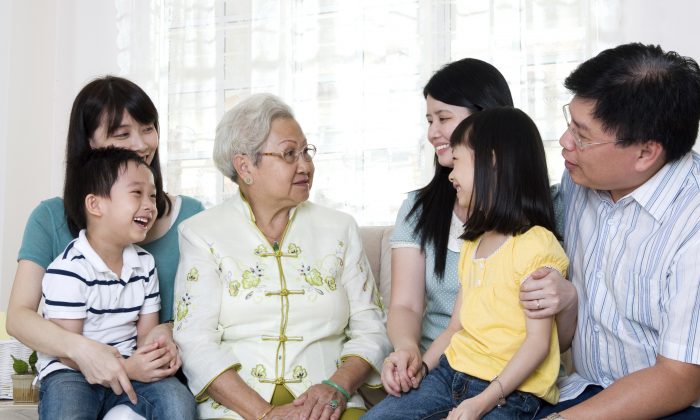 A grandmother is surrounded by her devoted family. Traditional Chinese culture regards filial piety as the root of all virtue and teaches that observance of filial piety begins with one’s parents, extends to the service of the ruler, and brings about peace and harmony in the world. (Wong Sze Yuen/Photos.com)
China

Li Gao, who lived during the Tang Dynasty (A.D. 618–907), was well known for his filial piety toward his mother.

Considered a key virtue in traditional Chinese culture, filial piety refers to showing respect for one’s parents and ancestors and complying with the commands and teaching of parents.

In the year A.D. 674, there was a drought in the capital. Rice became very expensive and many people starved to death. Li Gao was a government official at the time. He made an error in his work and was demoted to a position in Wenzhou and put in charge of local affairs.

The harvest in Wenzhou was also poor. The local government had several hundred thousand hu (an ancient Chinese measurement equal to approximately 40 quarts) of grain in storage. Li Gao wanted to give it as relief to the people. His subordinates advised him to wait for an order from the emperor.

Li Gao said, “Without food for days, a person will starve to death. There is no time to wait! If the sacrifice of my life can save thousands of other lives, there could be nothing more worthy.”

He ordered the grain to be given to the people, and then wrote a letter to the emperor criticizing himself. After reading the letter, the emperor gave Li Gao high praise and promoted him.

Once, on a visit to neighbouring locality, Li Gao saw a white-haired woman crying. He asked her why she was crying, and the woman said, “I have two sons, Li Jun and Li E, who have been away serving as government officials for over 20 years but have never returned to visit me. I am so poor I cannot even feed myself.”

Both Li Jun and Li E were very well-known officials.

“If one has extra time and energy, one could pursue further academic study. How could these two brothers with such low moral conduct serve as government officials?”

He reported the matter to the emperor. As a result, Li Jun and Li E were both dismissed from their official posts and banned from serving in the government.

Observing filial piety toward one’s parents is a traditional Chinese virtue and moral standard. Why did the ancient people place such a priority on filial piety and consider it the most important of all virtues?

It is because filial piety is closely linked to the improvement of one’s moral character. To practice filial piety, one must have a kind heart, which in itself is an essential quality for interacting with others in society.

Filial piety also encompasses many other virtues, including giving gratitude, repaying kindnesses, not forgetting one’s roots, respecting the elderly, and being considerate of others.

If one cannot even be kind to one’s own family, how can one be truly kind to others? How can one “put the family in order, rule the country, and bring peace to all under Heaven”?

From the time of the Han Dynasty (206 B.C.-A.D. 220), the royal court used filial piety as one of the main standards for choosing talented individuals to serve in the government.

Because Li Gao had a sincere heart of kindness and filial piety toward his parents, he was able to treat all others with kindness, even willing to risk his life to save the starving people.