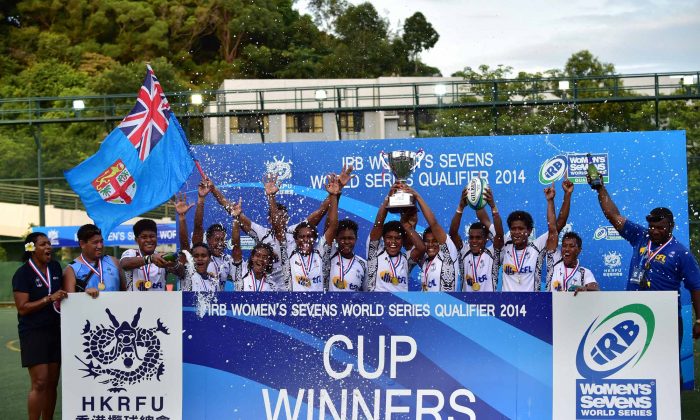 Hong Kong narrowly lost all three of their pool matches pushing them into the Bowl competition, but China with another strong showing reached the Semi-final of the Cup competition. Although China lost to Fiji in the Semi-final they won their 3-4 play-off match against Republic of South Africa 12-7. Japan won the Plate beating Brazil 33-7.

The Final contested between France and Fiji was full of surprises. Fiji scored first, but missed the conversion. France hit back with a converted try to make the score 7-5 to France at the end of the first half. France piled on two more tries in the early part of the second half taking them into a 19-5 lead with just 41/2 minutes left on the clock. Fiji doubled their effort and scored 2-tries to equal the match score at 19-19 and then engineered a dramatic winner to the far right of the field after the hooter had been blown for full time. Asinate Savu made a fine run down the right touchline to eventually score under the posts to make it 12-19 and then Luisa Tisolo equalled the score at 19-19 with a blistering break down the centre of the field and ran in the final winning try to make the final score 24-19.

Fiji, France, China and South Africa gain core team status to play in the 6-leg series starting in Dubai on Dec 4 to 6, 2014.

Men’s and Women’s Sevens Teams for Asian Games
The men and women selected for the Asian Games Rugby Sevens events at Incheon, South Korea at the end of Sept announced earlier this week are as follows: