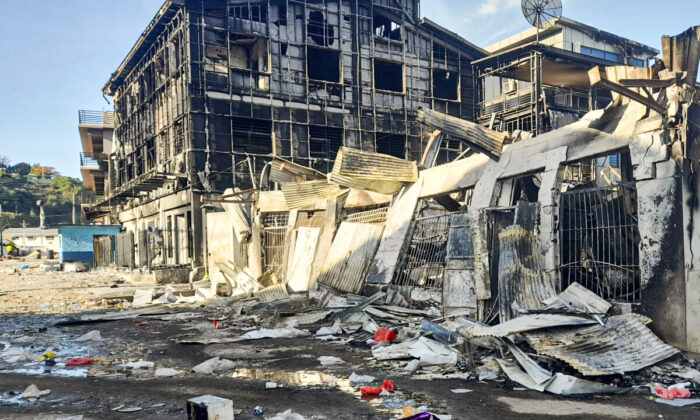 The prime minister of Fiji has announced the deployment of 50 soldiers to the Solomon Islands after riots saw numerous buildings razed to the ground.

The contingent will join the mostly Australian forces—with 34 Papua New Guinean troops—already dispatched to the island to maintain peace and order.

“Out of concern for the safety and well-being of our Pacific sisters and brothers in the Solomon Islands, 50 Fijian troops will dispatch to Honiara tomorrow,” Fijian leader Frank Bainimarama wrote on Twitter on Nov. 29.

He said another 120 troops would be on standby.

The capital of the Solomon Islands, Honiara, has been engulfed in civil unrest since Nov. 24, which saw protestors engage in looting and burning in the Chinatown district, as well as arson attacks on the nation’s parliament and prime minister’s residence.

Police were forced to fire teargas and warning shots to ward off protestors. Three charred bodies were later recovered from a store in Chinatown, however.

The Australian government deployed police and soldiers to the island after a request for intervention from the Solomon Islands Prime Minister Manasseh Sogavare—more police have been dispatched from the state of New South Wales.

The cause behind the violence stems from several issues related to long-running dissatisfaction with the Solomon Islands’ leadership.

Leaders of the province of Guadalcanal, where the capital is located, have been critical of the prime minister and his handling of corruption and service delivery.

Further, locals have also been frustrated by the lack of jobs on offer by some Chinese-owned businesses in the region.

However, the issue to have garnered the most headlines is the dispute between the national government, Sogavare’s cabinet, and the leader of the Solomon Islands’ most populous province, Malaita.

In September 2019, the Solomon Islands dropped diplomatic recognition of Taiwan in favour of the People’s Republic of China (PRC).

Daniel Suidani, premier of Malaita, has staunchly refused to follow his federal counterpart’s lead. Instead, he has maintained ties with Taiwanese leaders—much to the chagrin of Sogavare.

In June, Suidani even visited Taiwan to receive brain surgery.

Australia’s support to maintain order on behalf of Sogavare has been criticised by Grant Newsham, retired U.S. marine officer and former diplomat in the Asia-Pacific region.

He wrote in The Epoch Times that it was ironic that Australia, who is “locked in a nasty economic and political fight with China—is sending troops to support Sogavare who the Chinese reportedly have got in their pocket.”

“And Canberra is supporting him against citizens who want him to step down and Chinese influence eliminated,” he added.

A point that has not been lost on Malaita leaders.

“Malaitans were surprised; we are the last ones standing for democracy in the Solomons. We were thinking Australia would see the stand we were taking,” he said.

Prime Minister Scott Morrison has maintained that Australia would not “interfere in their democracy.”

“It’s not for us to be interfering in how they resolve those issues. We are just simply there as a good family member to try and provide a stable and safe environment for the issues that are there in the Solomon Islands to be peacefully worked through,” Morrison told reporters on Nov. 28.