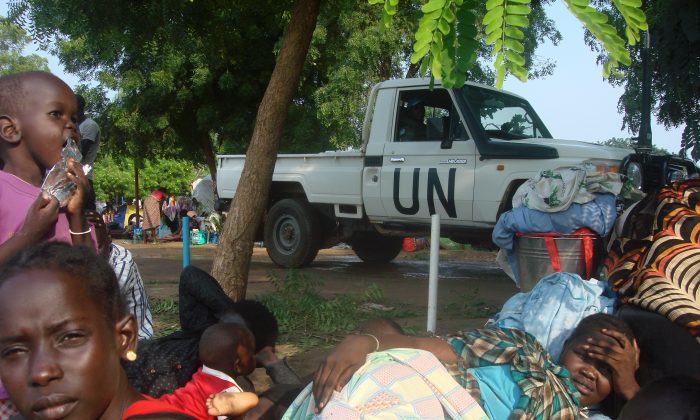 JUBA, South Sudan—Explosions and heavy weapons gunfire are shaking South Sudan’s capital Juba Monday in the fifth day of clashes between government and opposition forces, raising the specter of a return to civil war.

Widespread shooting preventing residents from moving in the city.

A “massive explosion” hit shortly after 9 a.m. followed by further blasts in the Tomping area of Juba, home to embassies, the airport and a U.N. base, said an aid worker.

“It rings through the whole city every time they fire,” said the aid worker, who spoke on condition of anonymity because he was not authorized to speak to press. “I think one of the tanks must be near me, my ears are burning.”

Explosions and “very heavy gunfire” sounding “like popcorn,” was reported by a resident in the Gudele area, who insisted on anonymity for safety.

Considerable fighting has centered around the U.N. base in the Jebel area, where some 30,000 civilians have taken refuge. The opposition also has a base near Jebel and their leader also has his home there.

Two government helicopters have been bombing areas near the base while ground forces shell the base, including a camp of tens of thousands of displaced civilians, according to a source within the U.N. compound, who insisted on anonymity because he is not authorized to speak to the press. The displaced civilians are mostly of the Nuer ethnicity and sought protection from the U.N. after a series of government-led killings of Nuer in Juba in 2013 which sparked the civil war, according to an African Union commission of inquiry.

Government officials have repeatedly accused the civilians inside the U.N. bases of being rebels or rebel supporters.

U.N. peacekeepers have not fired at the troops shelling the base, said the source in the base, who accused the soldiers with U.N. blue helmets of abandoning their positions.

There were 67 injuries and 8 deaths in the U.N. base Sunday, according to an internal situation report circulated among humanitarian organizations and seen by AP. Water tanks have not been able to bring water to the tens of thousands sheltering inside the base.

The fighting in the capital began Thursday and continued through the weekend, when South Sudan marked its fifth anniversary of independence from Sudan. The gun battles in the capital are similar to fighting in December 2013 that sparked a two-year civil war in which tens of thousands died and displaced more than 2 million.

President Salva Kiir and former rebel leader Riek Machar, who is now vice president, signed a peace accord last year and formed a transitional coalition government. But fighting continued despite the peace agreement and the current clashes in Juba threaten to plunge the parts of South Sudan that had been relatively stable back into violence.

Many of the thousands displaced by the renewed fighting in Juba are sheltering at the two U.N. bases, a World Food Program compound and other areas, said U.N. Office for the Coordination of Humanitarian Affairs spokeswoman Matilda Moyo.