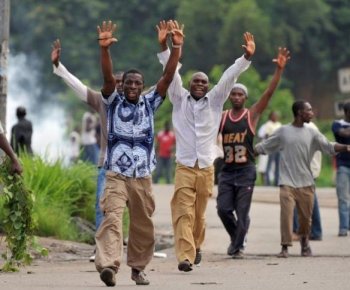 Supporters of Alassane Ouattara, who has been internationally recognized as the winner of last month's presidential election, raise their arms during a protest in Abidjan on Dec. 16. The incumbent president, Laurent Gbagbo, has refused to step down from power. (Issouf Sanogo/AFP/Getty Images)
Africa

Demonstrations took place in the country’s capital city of Abidjan because the incumbent president Laurent Gbagbo has refused to hand over the government to his opponent Alassane Ouattara, who has been internationally recognized as the election winner, including by the United Nations and the United States.

The U.N. peacekeeping mission in Ivory Coast (UNOCI) reported that heavy fighting had broken out between the rebels of the Forces Nouvelles group backing Ouattara and the security forces loyal to Gbagbo. Mortars and heavy weaponry are reported to have been used during the clashes.

People marched on the streets and headed to seize the state radio and television broadcasting station in Abidjan when the security forces started firing at them. Earlier, Ouattara had called for mass protests to capture government buildings and other offices, aiming to force Gbagbo to step down.

The U.N. mission said that it had deployed military and police personnel to provide security for Ouattara’s residence at the Golf Hotel in Abidjan.

There are no official figures of the death toll, but some witnesses told Amnesty International that at least 10 unarmed people were shot dead.

“When we saw security forces near the police station of the 21st arrondissement, we raised our hands and told them that we were unarmed,” one eyewitness told Amnesty International by phone.

“They refused to answer and threw tear gas grenades. Then immediately they shot at us. I saw dead bodies in the street. I know three of them,” the eyewitness said.

Both Gbagbo and Ouattara have been sworn in as president after the elections, and both have the backing of the rebel groups within the country.

This year’s election has been the first since 2000. It aimed to reunite the people in Côte d’Ivoire, the world’s largest cocoa exporter, who had separated during the civil war in 2002.