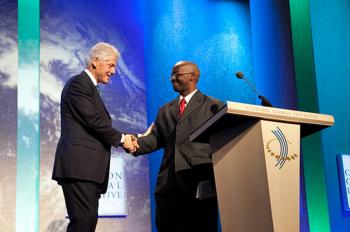 Matthew Robertson
Matthew Robertson is the former China news editor for The Epoch Times. He was previously a reporter for the newspaper in Washington, D.C. In 2013 he was awarded the Society of Professional Journalists’ Sigma Delta Chi award for coverage of the Chinese regime's forced organ harvesting of prisoners of conscience.
View profile
Follow
biggersmaller
Print
Ashifi Gogo is a man who has started a business that could save millions of lives. His company provides a service for people in developing countries to check whether the medicine they have bought is legitimate or not, using their mobile phones.

This is how it works: Person buys drugs. Person scratches a sticker on the bottle or packet to reveal a 12 digit pseudorandom number, then sends it to an SMS shortcode (a five digit number). Person gets an SMS response about whether the drugs are good or not.

In that time, the 12 digit number has been routed from the local telecom to servers in the United States, hosted by Amazon. It gets checked against the database, and they get a response SMS telling them whether they should return the drugs, or ingest them.

The cost of the service is footed by drug companies, who benefit both from preventing pirates from counterfeiting their wares, and maintaining their brand reputation (infant deaths linked to your brand is not good for business).

Counterfeits are able to enter the circulation system in countries like Nigeria because of the unconsolidated nature of the pharmaceutical industry: drugs often are sold from mom and pop stores, by people without any background in medicine. As far as the store owners are concerned, they might as well be selling mints. When someone in a truck shows up with a cheaper version of the stuff, they may opt to cut corners and save a few dollars. They often don’t know the product they received is dangerous—though they don’t know it’s safe either—but the result can be deadly for the consumer.

As with all of the world's entrepreneurs, Gogo's opportunity came through a confluence of propitious circumstances: he was in a fellowship at Dartmouth College, N.H., and thinking of an application for mobile authentication technology. In Nigeria, people were dying from counterfeit medication (a study conducted a few years ago indicated that up to 80 percent of the drugs there were fake).

He began talking to the Nigerian Food and Drug Administration, who introduced him to Merck Serono—a large drug company. They did a trial of close to 700,000 packages of diabetes drugs; over 10,000 people used the service to confirm their drugs' legitimacy. Sproxil was thus born. Sproxil’s service has now become part of the public service announcement that the Nigerian Heath minister gives every week; the uptake should pick up.

The technology will have solid application to other drugs, too, such as anti-malarials.

Nigeria was the best choice for first run, Gogo said in an interview with The Epoch Times, because of the prevalence of "counterfeit drugs, a large population, and government support."

Sproxil is the first company to provide a watertight solution to the counterfeit problem, and is now busy developing patents to secure their position. Kenya may be another growth region, and later Southeast Asia, and South America.