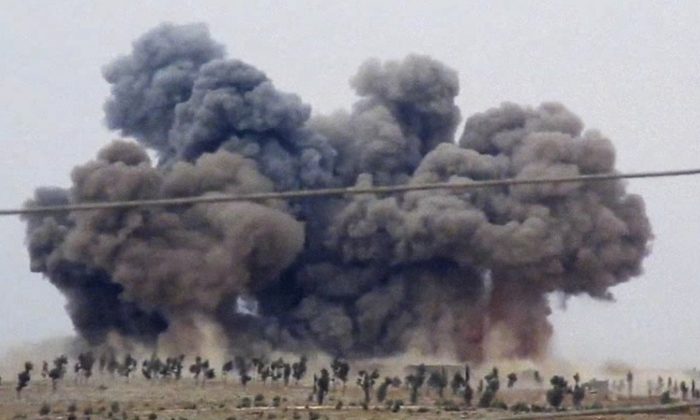 The fighting comes as the Russian airstrikes appear to have emboldened Syrian troops to launch a ground offensive after suffering a string of setbacks in northwestern Syria over the past few months.

The Britain-based Syrian Observatory for Human Rights said a government offensive began on four fronts early Wednesday in the northwestern provinces of Idlib and neighboring Hama. Observatory director Rami Abdurrahman said it is “the most intense fighting in months.”

Activist Ahmad al-Ahmad, who is currently in Idlib, said government troops are “heavily” shelling central areas after rebels attacked an army post and destroyed a tank.

The Observatory and al-Ahmad said the main launching point for government forces is the town of Morek on the highway that links the capital Damascus with the northern city of Aleppo, Syria’s largest city and former commercial center. Rebels have controlled areas on the highway since 2012.

The Local Coordination Committees, another activist group, said rebels were able to destroy two tanks and an armored personnel carrier in northern parts of Hama province near Idlib.

The Observatory said two helicopters believed to be Russian were seen flying at low altitude in Morek. It added that militants opened fire at the helicopters without striking them. It was not immediately clear if the pilots were Russian or Syrian.

The Islamic State group has no presence in the area that was attacked on Wednesday but al-Qaida’s affiliate in Syria, the Nusra Front, is active in central and northern Syria, as are Western-backed rebels.

Moscow has mainly targeted central and northwestern Syria, strategic regions that are the gateway to President Bashar Assad’s strongholds in Damascus, and along the Mediterranean coast.

Meanwhile, Syrian state TV quoted an unnamed Syrian military official as saying that Russian warplanes attacked Islamic State positions in the town of Al-Bab and the nearby town of Deir Hafer in the northern province of Aleppo.