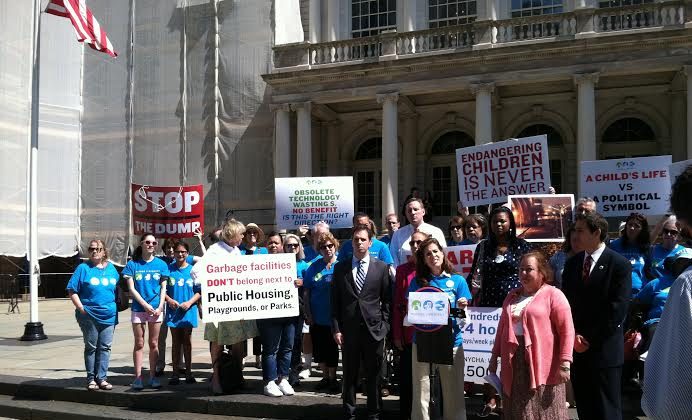 NEW YORK—As the permit to build the garbage station on East 91st Street expires in October, officials and advocacy groups are calling for the New York State Department of Environmental Conservation (DEC) to thoroughly review the permit before it is renewed.

They claim that new flood elevation guidelines established by FEMA after Superstorm Sandy will render the station susceptible to flooding. Based on its current construction plan, the station’s platform will sit 5.59 feet below the recommended floor elevation, according to advocacy groups’ calculations.

The initial permit for the station was issued in 2009. Pledge 2 Protect, a group opposed to the station’s construction, said the Environmental Protection Agency (EPA) has tightened its air quality regulations since then.

“The permit renewal is based on air quality standards, which were out of date in the original application five years ago,” Manhattan Borough President Gale Brewer said at a press conference on Thursday. She was joined by New York Congresswoman Carolyn Maloney, state Senator Liz Krueger, and Councilman Ben Kallos, among others.

“I’m a mother of three small children and I have heart disease. I fear I won’t be able to live to see my small children grow up,” said Regine LaCourt, a single mom who lives in public housing near the proposed station. “I moved here to be closer to my cardiologist. I’m sick.”
In a June 27 letter responding to state senator Krueger’s inquiry into the permits, the DEC said it felt there was no need to hold a hearing, according to Krueger.

A DEC spokesperson said in an email on Thursday that the state agency is now reviewing three permit applications related to the project. After their initial review, the public will also have a chance to comment on the project.