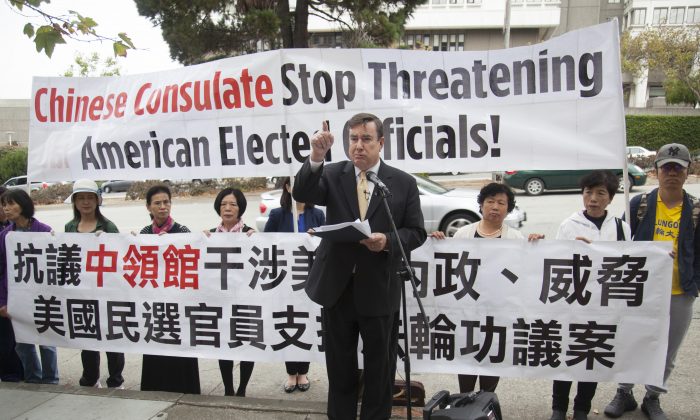 Senator Anderson speaks in front of the Chinese consulate in San Francisco during a rally to protest the Chinese regime’s interference in California’s legislature, on Sept 8, 2017 (Lear Zhou/Epoch Times)
China

SAN FRANCISCO—A rally was held outside the Chinese Consulate in San Francisco on the morning of Sept. 8 to protest the Chinese regime’s interference in California’s legislature.

The rally was sparked by a letter sent from the Consulate to all members of the California Senate that warned that support of SJR 10—a resolution sponsored by state Sen. Joel Anderson that condemns the Chinese Communist Party for its ongoing persecution of Falun Gong practitioners—would harm relations between the two governments.

Falun Gong, also known as Falun Dafa, is an ancient Chinese spiritual practice in the Buddhist tradition.  It consists of living according to the principles of truthfulness, compassion, and tolerance and performing gentle, meditative exercises.

In 1999 there were 70 million people practicing Falun Gong in China, according to a survey done by the Chinese state, or 100 million, according to Falun Gong practitioners.  In July 1999, however, then-Communist Party leader Jiang Zemin banned the peaceful practice and enlisted the nation’s entire security apparatus, media, and judiciary to participate in a massive persecution campaign that continues to this day.

The most disturbing element in this brutal campaign is the compelling evidence that shows Falun Dafa prisoners of conscience are murdered to supply organs for transplantation in China.

The China Organ Harvesting Research Center reports, “China now performs more organ transplants than any other country in the world, despite having few donations.” The Center asks where all of these organs come from.

The report shows that the Chinese regime is performing 60,000 to 100,000 transplants per year as opposed to 10,000 per year (the Chinese claim). The Chinese regime has engaged “in the mass killings of innocents, primarily practitioners of the spiritually‑based set of exercises, Falun Gong, but also Uyghurs, Tibetans, and select House Christians, in order to obtain organs for transplants.”

Also in 2016 the U.S. House of Representatives passed H. Res. 343, “Expressing concern regarding persistent and credible reports of systematic, state-sanctioned organ harvesting from non-consenting prisoners of conscience in the People’s Republic of China, including from large numbers of Falun Gong practitioners and members of other religious and ethnic minority groups.”

SJR 10 takes note of H. Res. 343 and condemns the Chinese Government “for any government-sanctioned persecution of Falun Gong practitioners in the People’s Republic of China.” With both Democratic and Republican co-sponsors, it was unanimously approved last week by the Judiciary Committee. The next step should have been a vote on the Senate Floor.

Unexpectedly, the Senate voted to refer SJR 10 back to the Rules Committee-essentially blocking it from coming to a vote in the Senate.

Speaking at the rally, Sen. Joel Anderson blamed the shelving of his bill on “a vicious letter sent by the Chinese Consulate to discredit Falun Gong Practitioners.” The letter threatened that SJR 10 “may deeply damage the cooperative relations between the State of California and China.”

Dated Sept. 1, the letter was sent to all California Senators the day after 200 human rights activists gathered at the State Capitol to support the unanimous approval of SJR 10 by the Senate Judiciary Committee.

The same day this letter was received, Senate Pro Tem Kevin de Leon moved to pull the resolution from the floor.

Phone calls and emails from the Epoch Times to Jonathan Underland, press secretary to Senator De Leon, asking for the Senator’s comments about this issue were not returned.

Outraged that his bill was not allowed even to be heard, at the rally on Friday Senator Anderson decried this “alarming interference with our legislative process by a foreign power has silenced the voice of human rights.”

Other states—Minnesota, Illinois, and Pennsylvania—have each passed resolutions similar to SJR 10 within the past few years.

Senator Anderson said, “We should stand together against genocide. This is not a party issue, it’s a human rights issue.”

With the long recess fast approaching, the Senate is in session every day until Sept. 15.  Senator Anderson took every opportunity he could find to speak about SJR 10 and attach it to other measures, including a similar bill that condemns the Chechnya government’s persecution of the LGBT community. He was not alone in this attempt. Noting California’s long history of showing support for human rights resolutions, Senator Stone, a Republican from Temecula, urged his colleagues to let SJR 10 be heard.

“We commonly do resolutions in support of human rights.  I think that this is a missed opportunity—one that makes us look hypocritical—that murder in one sense is justified as opposed to murder in another,” Stone said on the Senate floor.

To explain the apparent hypocrisy of the California Senate’s condemning the persecution of citizens in Chechnya, but not in China, Anderson believes one has to follow the timeline:

Threats and intimidation from the Chinese regime to American politicians are not new.

The U.S. Congress passed two resolutions—H Con ResR 188 in 2002 and H Con ResR 304 in 2004—that called for the Attorney General to investigate reports of Chinese Consular officials illegal acts of attempting to intimidate elected officials who showed support for Falun Gong practitioners. The resolutions also urged local governments to report to Congress, the Attorney General, and the Secretary of State any incidents of pressure or harassment by Chinese agents.

Outraged that the Chinese Government’s power to suppress free speech extends beyond its own borders to California’s Senate Leadership, Senator Anderson has vowed to continue pleading for his bill until it is allowed to be heard.

In an appeal to his colleagues’ consciences, he said: “We should be standing strong against genocide anywhere in the world. There were those who denied the Holocaust. There is no excuse with what we know today to deny the holocaust that is going on in China against Falun Gong practitioners. We need to stand up and say that nobody’s body parts should be harvested for their religious beliefs.”

He addressed directly the citizens of California, asking those who believe the Senate should be on record voting against genocide to call their legislators and tell them they want to see a vote on SJR 10.