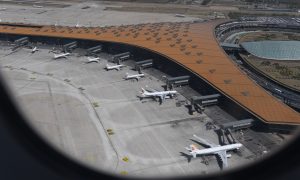 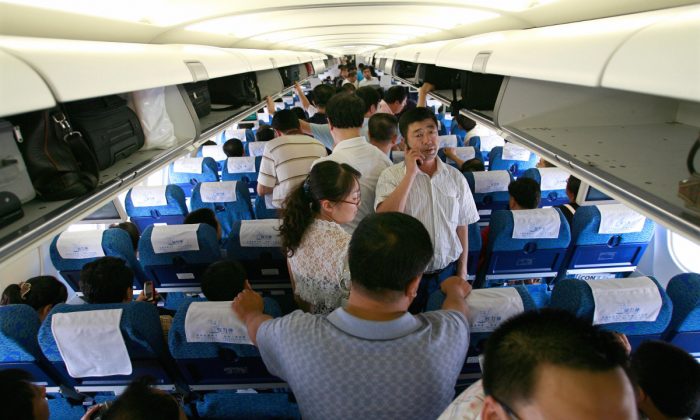 Inside a plane waiting at an airport. (Teh Eng Koon/AFP/Getty Images)
Social Issues

Fight Breaks Out in Plane When Passenger Demands Parachute, Attempts to Open Door

A man on a flight suddenly demanded a parachute after pounding on the windows and trying to open the hatch of the airplane. He was subdued by both passengers and attendants, and taken by security guards when the plane landed, according to state sponsored Chinese news agency Beijing Youth News.

The incident occurred on the evening of May 20 as flight FU6509 flew through China’s southern provinces, from Fuzhou City to Kunming City. The man was not identified,  and was released on May 24.

The plane landed safely, and only one flight attendant received slight injuries. No other passengers were harmed.

The man was said to be suffering from mental illness, according to all Chinese media reports. Mental illness is the reason given for all instances of abnormal behavior in China.

The Fight for the Parachute

40 minutes before arriving in Kunming, the man was said to have lost control of his behavior, according to the Beijing Youth News.

Before others began recording footage of the man, he used his cellphone to bang on the windows and attempted to open the hatch, according to the Beijing Youth News. He also reportedly shouted loudly, “I want a parachute!”

Footage that appears to have been captured by a female flight attendant shows the struggle between the man and other people on the plane. The people first seen are a flight attendant, a safety officer wearing black, and the man in blue who had shown reckless behavior, according to the Beijing Youth News.

However, he can still be heard. Once the man was restrained, he began screaming loudly. He then repeatedly shouted, “Save me!”

A female flight attendant speaks on the loud speaker over his screams, asking passengers to remain seated.

When the plane landed, the man was turned over to airport security officers. He was then released on May 24.

The report said only one flight attendant was slightly injured, and no other passengers were harmed.