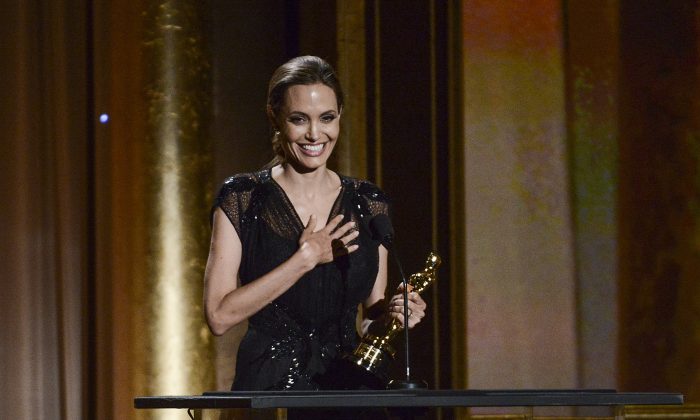 FILE - In this Nov. 16, 2013 file photo, actress and honoree Angelina Jolie receives the Jean Hersholt Humanitarian Award at the 2013 Governors Awards in Los Angeles. The 38-year-old Oscar winner came to the Dolby Theater in Los Angeles on Thursday, Feb. 27, 2014, to run through the lines she’ll say in front of millions at the 86th Academy Awards on Sunday, March 2, 2014. Afterward, she hung around chatting to show producers and introduced herself as “Angie” to a group of college students serving as trophy carriers this year. (Photo by Dan Steinberg/Invision/AP, file)
Entertainment

Angelina Jolie was once rumored to be the director of “Fifty Shades of Grey,” the movie adaptation of the popular trilogy.

In an interview with Entertainment Weekly, she said, “I came very clear out of the gate: after ‘In The Land of Blood and Honey,’ if I ever directed again, it would have to be a certain kind of film.”

Sam Taylor-Johnson eventually became the film’s director. Several weeks ago, shooting for the movie wrapped up.

“You know, I’m looking forward to seeing what Sam [Taylor-Johnson] does with ‘Fifty Shades’ and she’s amazing. I — I think they’re just … it’s funny, I think with directing, you just think: I’m better at telling some stories than others but um, who knows?” Jolie added.

Entertainment Weekly said that when asked the question, Jolie laughed and blushed.

Marcia Gay Harden, who plays the mother of the film’s title character Christian Grey, told the BBC that filming was like working on “any other movie.”

Harden explained: “I’m momma Grey and we’re having a dinner party. ‘Do come over to the dinner party? Oh, did you like your meal? Oh lovely. Oh, would you like another cocktail. Oh, perfect.’ That’s my experience,” she added.