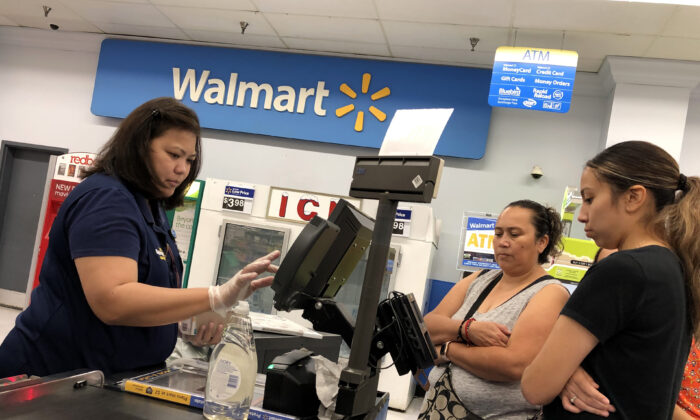 Customers look on as a Walmart cashier rings up their purchases at a Walmart store in California. (Justin Sullivan/Getty Images)
US News

“Quiet quitters”—employees who strictly stick to their job descriptions and do only the bare minimum required of their tasks—now make up a majority of the U.S. workforce, according to the results of a latest Gallup survey.

Most quiet quitters fit Gallup’s classification of “not engaged” at work. Apart from the 50 percent quiet quitters, the proportion of “actively disengaged” workers in the country during the second quarter this year was at 18 percent, Gallup said in a Sept. 6 report. At 1.8 to 1, the ratio of “engaged” to “actively disengaged” employees is the lowest in nearly a decade. Of the remaining workforce, only 32 percent were “engaged.”

“Loud quitters,” which refers to employees who are actively disengaged from their work, accounted for 18 percent of the American workforce.

Most of the employees who are “not engaged” or “actively disengaged” are looking to switch their jobs, the survey found.

Among Gen Z and younger millennial employees (including those below the age of 35) who work remotely, there was a decline of 10-plus percentage points of those who “strongly agree” that someone cares about them at work, encourages their development, and that they have opportunities to learn and grow.

In an interview with CNBC, Michael Timmes, a senior specialist at Insperity, a human resources consulting firm, warned about negative workplace consequences due to quiet quitters.

“From an office perspective, quiet quitting can cause conflicts between employees, as some employees will feel others aren’t carrying their weight,” he said. “Overall, this can backfire on the employee and can also create a wave of inadequate and underdeveloped employees.”

The Sept. 6 Gallup survey report also insists that quiet quitting is a symptom of “poor engagement.” It actually ranks addressing “manager engagement” as the first step to resolving the disturbing trend of quiet quitting.

The report points out that only one in three managers are engaged at work. It recommended that managers have one meaningful conversation of around 15–30 minutes with each team member every week.