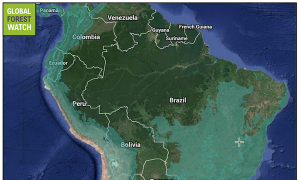 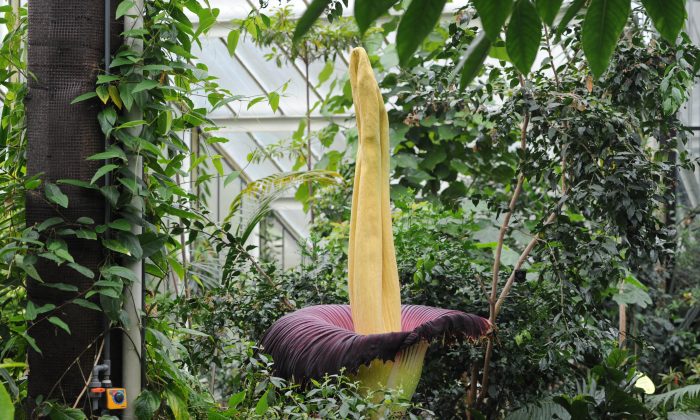 Titan Arum, also know as The Big Stink due to its repulsive odour is in rare full bloom at Kew Gardens, London on April 22nd, 2016. A survey by the Royal Botanic Gardens at Kew, said 21 per cent of species are under threat. (Stuart C. Wilson/Getty Images)
Environment

A fifth of the world’s plant species are at risk of extinction, researchers warned on Tuesday, May 10th, in an unprecedented global census of the plant kingdom.

The survey by the Royal Botanic Gardens at Kew, London, said 21 per cent of species are under threat. The report, the first of its kind, is intended to become a global reference point for the study of plants.

The study, which estimates there are a total of 390,900 plants known to science, found farming to be the biggest extinction threat, representing 31 per cent of the total risk to plants.

Logging and the gathering of plants followed at 21.3 per cent, with construction work accounting for 12.8 per cent of the risk.

The threat of climate change and severe weather was estimated at making up 3.96 per cent, although scientists said it may be too early to measure the long- term effects.

Other threats came from invasive species, dam building, and fires.

“There has never been a State of the World’s Plants,” said Kathy Willis, director of science at Kew, which has one of the world’s largest plant collections in its sprawling greenhouses and gardens.

“Given how absolutely fundamental plants are for human wellbeing, for food, fuel, climate regulation, it’s pretty important we know what’s going on.

“Unless we look at this information – the knowledge gaps – and then do something about it, we are in a very perilous situation, if we ignore the thing that underpins all our human wellbeing,” she warned.

The report said that some 1,771 areas of the world have been identified as “important plant areas” but very few have conservation protection measures in place.

It also said that 2,034 vascular plants – which exclude mosses and algae – were discovered last year alone, including an insect-eating sundew, a new type of onion, and a giant slipper orchid.

Most new finds are in Australia, Brazil or China.

The report will be published annually and Kew Gardens hopes it will allow for comparisons on preserving the world’s plants.

“This has been a huge undertaking,” said Steve Bachman, one of the report’s authors.

“We engaged with more than 80 scientists to pull this together.”

He said it was a “huge step forward, pulling together existing knowledge in a condensed and readable version so we can really spread the message about the importance of plants to a much wider audience”.

But raising public awareness can be more complicated than warning about threats to African elephants or Bengal tigers.

The report stressed the importance of collecting samples of “crop wild relatives”, cousins of plants used as common crops with traits that could make food plants more resilient to climate change and diseases.
Willis said it may take until 2030 before the impact of climate change can really be measured.

“For most of the major groups of plants we’re talking about, it takes at least 10, 20, 30 years before the next generation starts to produce flowers and pollen,” she said.