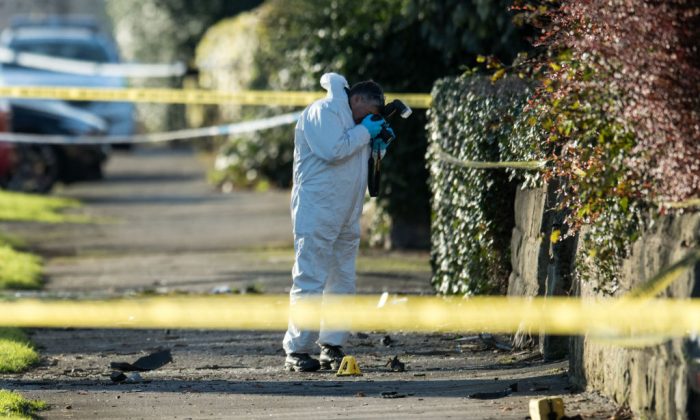 A crime scene investigator photographs the site of a car crash in which five people, including three children, were killed after a stolen car crashed into a tree on Stonegate Road, in Leeds, northern England on Nov. 25, 2017. (Oli Scarff/AFP/Getty Images)
UK

A 15-year-old was due to appear in a Leeds court today charged with causing the deaths of five young people in a crash over the weekend described by police as “carnage.”

Three children and two young adults were killed when the stolen car they were travelling in crashed into a tree on Stonegate Road, Meanwood on Saturday Nov. 25.

“The teenager, whose identity cannot be released for legal reasons, has been charged with five counts of causing death by dangerous driving in relation to a collision in Stonegate Road, Meanwood, on Saturday,” said a statement from West Yorkshire Police.

The deceased were all traveling in the Renault Clio, together with the accused, when it ploughed into the tree on Stonegate Road.

“When I arrived in the early hours of Sunday morning it was a scene of total carnage and it would have been a horrendous situation for anyone,” DCI Griffiths told a press conference, reported The Yorkshire Evening Post.

“I would not like to compare it to anything else I have seen.”

The names of the deceased were released on Saturday.

Two brothers Ellis and Elliot Thornton-Kimmitt, aged 12 and 14, died in the crash along with 15-year-old Darnell Harte and 24-year-old Robbie Meerun. A 28-year-old father-of-two whose partner is pregnant with a third child, Anthony Armour, also died. All are from Leeds.

Police said that emotions were “running high in the community” after families had suffered a devastating loss.

All seven people involved in Leeds car crash were in the vehicle, police say https://t.co/VLr0LsuVhq

A vigil was on held on Sunday evening for the young victims, with dozens of mourners gathering at the scene of the crash, in Stonegate Road, Leeds, reported The Sun.

Family members payed tribute to their loved ones killed in the crash.

Carr Manor Community School said in a statement on its website, “We are deeply upset to learn that one of our pupils, Darnell Harte, is amongst the fatalities involved in this tragic incident and our sympathies and condolences go out to the family and all those affected by the loss of this young life.”

Dear reader, we have a favour to ask of you. We work hard to deliver important and interesting articles to you, but we can’t do it without ad revenue.

Please help support independent journalism by sharing this article with your friends and family. It takes less than a minute. Thank you.