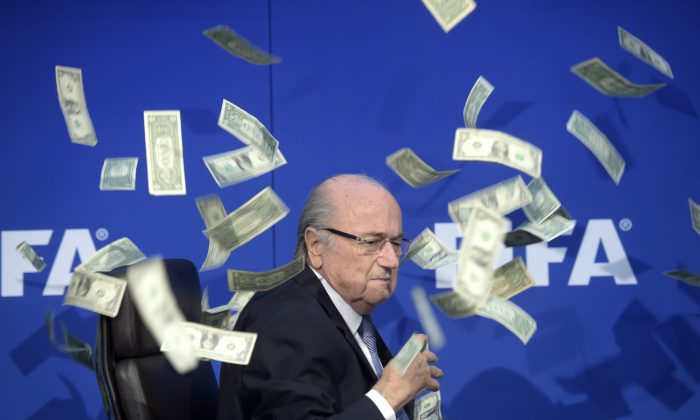 FIFA president Sepp Blatter is photographed while banknotes thrown by British comedian Simon Brodkin hurtle through the air during a press conference following the extraordinary FIFA Executive Committee at the headquarters in Zurich, Switzerland, on July 20, 2015.
Europe

ZURICH—Sepp Blatter’s news conference at FIFA was disrupted and delayed Monday by a British comedian’s stunt.

As Blatter took his seat, performer Simon Brodkin rose from a front-row seat to speak and shower the FIFA president with what appeared to be fake money bills.

“This is for North Korea 2026,” Brodkin said as he put the notes on the desk in front of Blatter. “Thank you very much. As a North Korean football ambassador, I’m delighted that I’ve been able to seal the deal with FIFA and North Korea for the 2026 World Cup. It makes sense for everyone.”

Throwing money in the air as security led him away, Brodkin said: “Here we go Sepp. Thank you. Cheers Sepp. It’s all there, as discussed. Thank you. Good doing business.”

The comedian also tried to disrupt a performance by Kanye West at the Glastonbury festival in Britain last month.

On Monday, he was ushered out of the auditorium at FIFA headquarters.

Blatter said he would leave the room because “we have to clean here first.”

“This has nothing to do with football,” said Blatter, who returned within a few minutes and quipped about the incident.

“I just called my late mother and she said, ‘Don’t worry, it’s just a lack of education,'” he said.