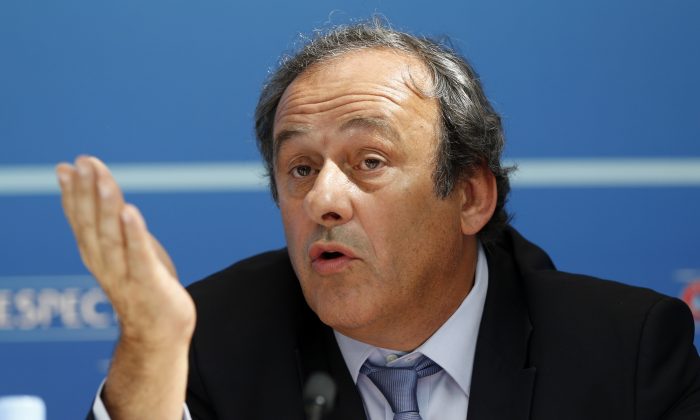 UEFA chief Michel Platini gestures as he speaks during a UEFA press conference after the draw for the UEFA Europa League football group stage 2015/16 in Monaco, on Aug. 28. (VALERY HACHE/AFP/Getty Images)
Europe

PARIS—The FIFA ethics committee has requested a life ban for Michel Platini, the Frenchman’s lawyer said Tuesday, a move that would rule the UEFA president out of the race to succeed Sepp Blatter.

Blatter could also face expulsion from world soccer over a $2 million payment of FIFA money he approved to Platini in 2011.

Thibaut d’Ales told The Associated Press that the maximum sanction was asked for when the FIFA ethics committee investigations unit submitted its final case report.

Blatter could also face expulsion from world soccer over a $2 million payment of FIFA money he approved to Platini in 2011.

“The overreaching of the request really convinces us of this commission’s total lack of credibility,” D’Ales said in a telephone interview. “There is not a single tangible element in this case that can confirm the suspicions.”

Platini is currently serving a 90-day ban over cash he got as backdated salary almost nine years after he stopped working as Blatter’s presidential adviser from 1998 to 2002.

Platini denies wrongdoing and said he had a verbal contract with Blatter to receive the money.

Blatter has argued that an oral agreement is valid under Swiss law. However, FIFA was also not legally required to pay Platini after five years passed.

Eckert is expected to give his verdicts in the cases of Platini and Blatter in December. Any sanctions can be challenged at the FIFA appeals committee and Court of Arbitration for Sport.

D’Ales said he was informed of the ethics committee’s request on Monday and decided to make it public after it leaked in the French press. He said FIFA’s aim is to prove that there was no contract between Platini and Blatter.

“Obviously we’ve got the proof that such a deal existed,” D’Ales said. “We will submit it to CAS, which will handle the case within a fairly short space of time.”

A spokesman for the FIFA ethics prosecutors declined to confirm what sanction was requested last week.

“We are entitled to comment but we decided for reasons of personality rights and the presumption of innocence not to publish the request,” Andreas Bantel told The Associated Press in a telephone interview. “If Mr. Platini wants to comment on the request he is entitled to do that.”

Platini aims to clear his name and stand as a candidate in the FIFA presidential election on Feb. 26 to succeed Blatter, who is stepping down. Blatter announced his exit plans on June 2 under pressure from American and Swiss federal investigations into bribery and corruption at FIFA.

Switzerland’s attorney-general has opened criminal proceedings against Blatter over the $2 million payment as suspected criminal mismanagement of FIFA money.