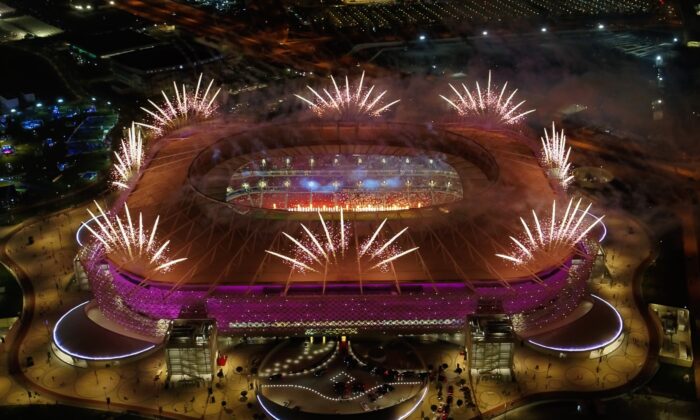 FIFA announced a number of restrictions against Russia on Feb. 27, but the sports governing body won’t immediately expel the country from qualifying for international tournaments.

The unanimous ruling by the FIFA Bureau, featuring the six regional soccer confederation presidents, said in a statement that Russia’s national team will no longer be allowed to compete under the name “Russia,” and must instead play under the name of its federation—”Football Union of Russia (RFU).”

The national team is also banned from hosting “home” matches and all international games must be played on neutral territory, without Russian spectators being allowed in the venue.

In addition, “no flag or anthem of Russia will be used in matches where teams from the Football Union of Russia participate,” the bureau said in the statement.

FIFA announced the measures just days after the Union of European Football Associations (UEFA) pulled the 2022 Champions League from St. Petersburg and moved it to Paris, also saying Russia and Ukraine won’t be allowed to host games in their home country and must play in a neutral country. Noël Le Graët, France’s soccer federation president, told the Le Parisien daily over the weekend that he was leaning toward excluding Russia from the World Cup.

“The teams discussed the position of our sport, and the conclusion is, including the view of all relevant stakeholders, that it is impossible to hold the Russian Grand Prix in the current circumstances,” Formula One said in a statement.

Several national teams, including Poland and Sweden, were quick to criticize FIFA’s response, saying the additional measures won’t change their decision not to play against Russia.

“Today’s FIFA decision is totally unacceptable,” Polish football federation president Cezary Kulesza said on Twitter. “We are not interested in participating in this game of appearances. Our stance remains intact: Polish National Team will NOT PLAY with Russia, no matter what the name of the team is.”

On March 24, Poland is scheduled to play against Russia in a World Cup playoff semifinal. The winner of the Russia-Poland playoff is due to host Sweden or the Czech Republic on March 29 to decide who advances to the Nov. 21-Dec. 18 World Cup in Qatar.

Swedish federation president Karl-Erik Nilsson, the senior UEFA vice president, told Fotbollskanalen that he was not satisfied with FIFA’s decision. The Czechs expressed a similar view to Poland, saying FIFA’s compromise has not changed their decision not to play Russia.

FIFA said it had engaged with Poland, Sweden, and the Czechs, and would remain in “close contact to seek to find appropriate and acceptable solutions together.”

According to regulations set forth by “FIFA’s World Cup,” the three countries could be liable for disciplinary actions or mandatory fines and compensation if they refuse to play Russia.