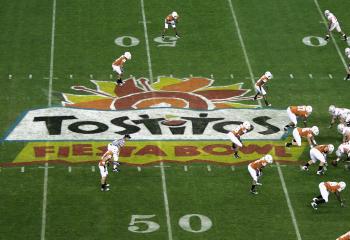 Susan Shan
View profile
Follow
biggersmaller
Print
One would think that it was destiny for the undefeated sixth-ranked Boise State Broncos (13–0) and the undefeated fourth-ranked Texas Christian Horned Frogs (12–0) to meet each other in the 2010 Tostitos Fiesta Bowl to be played on January 4.

After all, the Broncos played in the Fiesta Bowl three years ago against Big 12 powerhouse Oklahoma Sooners and won 43–42 in overtime. That game is often referred to as one of the best college football games ever witnessed.

In that game, the Broncos blew an 18-point lead halfway through the third quarter. With 1:02 remaining in the game, quarterback Jared Zabransky threw an interception to Sooners cornerback Marcus Walker, who returned the pick for a touchdown.

The pick-six gave the Sooners a 35–28 lead that all but sealed Boise State’s fate. On their next possession, the Broncos were stuck with a fourth-and-18 at midfield with less than 30 seconds left.

That was when Broncos coach Chris Petersen resorted to a designed trick play. The famous hook-and-ladder call resulted in Zabransky throwing a 15-yard pass to Drisan James, who then lateraled the ball to Jerard Rabb, who ran the rest of the way into the end zone with seven seconds left on the clock.

In OT, Oklahoma’s Adrian Peterson ran for a 25-yard touchdown on the first play from scrimmage. Once again, the Broncos were forced to respond.

Faced with a fourth-and-two at the 6-yard line, Vinny Perretta passed to Derek Schouman for a touchdown. Petersen decided to go for the two-point conversion to win instead of the extra point to tie.

Zabransky took the snap and looked toward his three wide receivers on the right. He then straightened up into a Statue of Liberty pose and sneakily handed the ball behind his back to Ian Johnson, who ran easily into the end zone for the win.

Boise State finished that season with a perfect 13–0 record—the only undefeated team in college football—but not as the national champion, sparking plenty of debate as to the validity and fairness of the BCS system.

As if that 2007 Fiesta Bowl was not enough to hype up this year’s matchup between Boise State and TCU, last year’s San Diego County Credit Union Poinsettia Bowl featured both teams, including a 12–0 Boise State going for their 13th win.

In last year’s Poinsettia Bowl, the Broncos jumped out to a quick 10–0 lead in the first quarter, but could not hang on as the Horned Frogs scored what would end up being the game-winning touchdown in the middle of the fourth quarter, squeaking out a 17–16 victory.

Cincinnati (12–0) is the fifth undefeated team and is playing against last year’s national champion Florida (12–1) in the Allstate Sugar Bowl.

Yes, there are currently five undefeated teams in college football.

In order to understand the complex BCS ranking system, one must first realize that the NCAA does not formally recognize a national champion and football is the only NCAA sport in which a yearly champion is not determined by an NCAA-sanctioned championship event.

Instead, in its Official NCAA Division I Football Records Book, the NCAA recognizes the choices for national champions from numerous “selectors,” who consist of various individuals and organizations.

The most recognized selector was the Associated Press, made up of 65 members of the sports media who rank the best 25 teams in the nation, until the BCS came along in 1997.

Because there were often split national champions in any given year, the BCS was created to unify the two biggest human selectors, the AP Poll and the Coaches Poll, with several different computerized rankings. The end result would be to have the top two ranked teams face off in a BCS Championship game.

The Coaches Poll is under contract to recognize the BCS Championship game winner as its national champion but the AP is not.

After a string of controversies surrounding the BCS, the AP in December 2004 refused to allow its poll to be used as a factor in determining BCS rankings. After 2004, the Harris Interactive College Football Poll replaced the AP Poll in the BCS formula.

Endless debates have spawned on the injustices of the BCS system. Many hope and pray for a playoff system similar to college basketball’s March Madness in order to dispel any differing opinions on who should be the national champion.

The only automatic berths in BCS games belong to champions from the above-mentioned conferences, resulting in a large influx of money flowing into those conferences each year from postseason play via sponsors and television deals. Non-BCS schools receive invitations through certain stipulations and at-large bids (decided by committee).

Neither Boise State nor TCU is a member of the six BCS conferences, but their stellar records have earned them spots in BCS bowl games. The Fiesta Bowl has had a terrific recent history and 2010’s version will be making history on many grounds.

It will be the first time that two teams from non-BCS conferences have earned berths in addition to playing each other in the same bowl. It is also the first time in BCS history that two unbeaten teams will meet in a bowl game not designated as the national championship game.

The game will further stir the controversial BCS pot, but as fans, we ought to just feel thankful that two quality teams from non-power conferences will have the opportunity to showcase their talents on one of the biggest national stages and making history doing it.