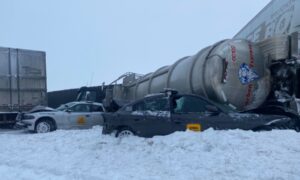 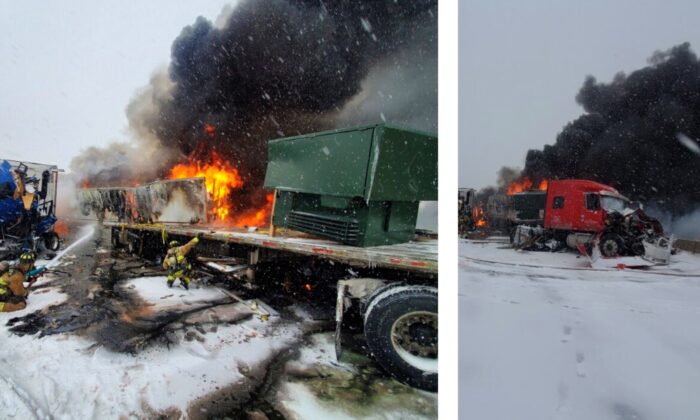 Multiple vehicles blazing in a pile-up on the Turner Turnpike westbound near Post Road in Oklahoma on Feb. 14, 2021. (Courtesy of Oklahoma Highway Patrol)
US News

A fiery multi-vehicle crash led to several people being injured and rushed to hospitals as authorities shut down a major Oklahoma highway over the weekend, officials said.

The pileup happened on Sunday around 3 p.m. on the Turner Turnpike westbound near Post Road when two semi-trucks collided. The road’s westbound and eastbound lanes were blocked for hours as first-responders worked on the injuries at the crash.

Oklahoma Turnpikes noted that traffic heading westbound was being diverted to Kickapoo Turnpike, while eastbound traffic was diverted to Interstate 35. All lanes on the Turner Turnpike were reopened to traffic early Monday, local authorities said.

“This is involving multiple semis and passenger vehicles,” the Oklahoma Highway Patrol and Department of Public Safety said.

“Just a reminder—do not get out if you don’t have to,” the agency added, warning drivers that “conditions are definitely getting worse.”

Officials shared several pictures of the dramatic crash showing an overturned tractor-trailer and large plumes of black smoke as firefighters worked to control the flames.

We are currently working this injury crash on the Turner Turnpike westbound near Post Road. This is involving multiple semis and passenger vehicles. Traffic is being diverted at Hogback Road. Just a reminder – do not get out if you don’t have to. pic.twitter.com/lAtnol944f

State highway officials said they had responded to 14 injury collisions, 19 non-injuries, and assisted 46 motorists overnight until 11 a.m. on Sunday.

The crash came after Oklahoma declared a state of emergency for its 77 counties due to inclement weather conditions. Gov. Kevin Stitt also activated National Guard units to assist state agencies with tasks including rescuing stranded drivers.

The National Weather Service said Sunday that weather forecasts through early Tuesday call for 8 to 12 inches of snow in central Oklahoma.

You’re doing pretty good Oklahoma. Here’s what we worked from midnight until 11 am today.

Conditions are definitely getting worse out there so continue to stay off the roads if you can!

Also on Sunday, the Texas Highway Patrol reported several multi-car pileups in West Texas, including one that involved 25 vehicles and shut down a portion of Interstate 20 westbound. Officials strongly discouraged travel in current wintry conditions.