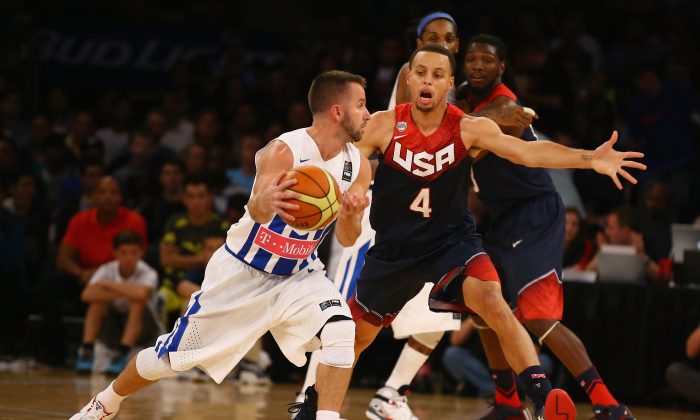 Stephen Curry #4 of the USA defends against Jose Barea #5 of Puerto Rico during their game at Madison Square Garden on August 22, 2014 in New York City. (Al Bello/Getty Images)
US

Team USA’s roster for the upcoming FIBA World Cup has been finalized after months of trying to figure out how to plug holes left as more and more players dropped out of the running.

Kevin Durant, Kevin Love, and Blake Griffin were among the players who were in contention at one point but later removed themselves from contention.

The final cuts included All-Star Damian Lillard, who was expendable because of the belief in Derrick Rose’s help and the strong play by Kyrie Irving. James Harden and Stephen Curry can also run the point.

USA Basketball chairman Jerry Colangelo said Lillard was a victim of too many players at his position and handled the news gracefully.

“He took it, I mean he was a real pro,” Colangelo said. “He saw it, he understood … he just handed it extremely well.”

The Americans had to be certain Rose could handle the workload after the Chicago Bulls star missed most of the last two seasons after a pair of knee surgeries. He sat out a couple of practices and an exhibition game because of soreness, but was back for Friday’s 112-86 victory over Puerto Rico.

“We feel comfortable with Rose based on what he’s communicating with us, what the doctor, therapists around him are telling us, and more importantly what he has shown us,” Colangelo said. “So yeah, that was a decision we were willing to make.”

A potential showdown with Spain in the final game of the World Cup–with an automatic entry into the 2016 Olympics, enabling the winning team to forgo play next summer, at stake–prompted the team to stock up on big men, cutting none of them.

“Just based on how we’re constructed, we thought the insurance of having another big — I don’t want people telling us later, ‘you should’ve, you could’ve,'” Colangelo said

“We didn’t have to do that. We don’t need to face that, because we’ve got some legitimate bigs that we think collectively can be very effective.”

Irving and Rose will split time at point guard while Curry is backed up by his Golden State Warriors teammate Klay Thompson and Harden at small forward is backed up by Rudy Gay.

DeMar DeRozan is also available at the swingman position, while Gay will spend some time at power forward in the small ball lineup.

Coach Mike Krzyzewski and Colangelo announced the roster a few hours after the game against Puerto Rico on Friday night, with Drummond’s inclusion perhaps the biggest surprise.

The Detroit Pistons center played in only one of the three exhibition games, sitting out Friday night. But Colangelo said the Americans were intrigued with what he called a “physical specimen.”

“Here’s a 6-11, 7-footer, 280-pound athlete, young, still learning the game. We want to just be sure,” Colangelo said. “And it’s pretty tough to leave that kind of an athlete behind, especially when we believe he will be a big part of the future without question for USA Basketball at 21 years of age.”

And especially when the Americans could see a Spain frontline of Marc Gasol, Pau Gasol and Serge Ibaka in the gold-medal game on Sept. 14. Colangelo said the Americans didn’t have any particular team in mind when carrying more bigs than usual, just a desire to unveil a different look, perhaps even play two of them together.

“If we choose to show our bigs, we can. You can’t do that if you don’t have them with you,” Colangelo said.

“This is a situation where we’ve decided that here’s an opportunity to give our opposition a whole new look, if we choose to do it. In the past, we didn’t have the bigs to be able to do that, and that’s the key.

“We’re very, very strong on the perimeter, we’ve been saying that. Yes, that’s the style of choice, predicated on the talent. But coach is excited about the possibilities.”

The U.S. starts play against Finland on August 30.

The top four teams in each group then advance to the next round, kicking off the knockout phase of the tournament, which will continue through the Gold Medal Game on September 14.