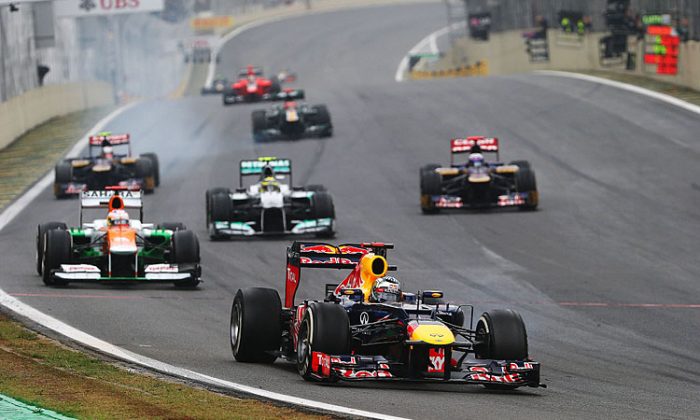 Sebastian Vettel of Red Bull Racing leads a train of cars through Turn One during the Formula One Brazilian Grand Prix, November 25, 2012. Vettel will be back with Red Bull, according to the official 2013 F1 roster. (Mark Thompson/Getty Images)
Motorsports

The Federation International l’Automobile (FIA) which governs most motorsports around the world, published its official 2013 Formula One team and driver roster on Dec. 1. The list includes 11 teams, down one from 2012, after the financial failure of HRT, and lists several teams’ drivers as “to be announced.”

Teams have confirmed some of the “TBA” drivers are known: Nico Hulkenberg and Esteban Gutierrez will drive for Sauber, Jean-Eric Vergne and Daniel Ricciardo will return for Toro Rosso, Charles Pic has been signed by Caterham and Timo Glock will drive for Marussia. Possibly these names were not submitted by the FIA’s Nov. 30 deadline and thus were not published.

HRT, which joined the grid in 2010, has been troubled by funding problems since its start as Campos Meta and then Hispania. Current owners Thesan Capital, which bought the team halfway through 2011, announced it was for sale early in November but couldn’t close a deal.

HRT finished 11th of twelve teams in its first two years and last in 2012, as money for replacement parts dried up.

The 19-race 2013 Formula One season starts with the Grand Prix of Australia on March 17. The schedule, like the team roster, is one shorter than 2012: organizers of the proposed New Jersey Grand Prix could not guarantee it would be ready and has been postponed until 2014.