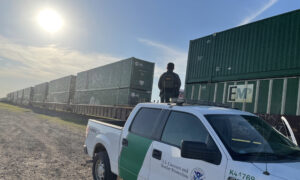 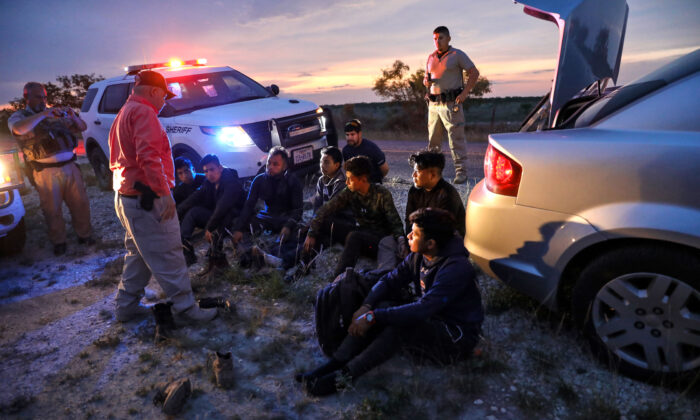 BRACKETTVILLE, Texas—Law enforcement authorities are releasing human smugglers with a citation rather than arresting them as counties struggle with a critical shortage in jail space.

The jail in Kinney County, Texas, holds a maximum of 14 people, but the sheriff tries to hold two spaces open for “something violent, or something out of the ordinary.”

Sheriff Brad Coe said he has 12 inmates in his jail right now, as well as another six being housed in the neighboring Val Verde County jail. Ten of the 18 are in jail for the smuggling of illegal aliens.

Coe said jail space is the biggest problem in small counties dealing with the border crisis.

A Kinney County deputy pulled over a woman on May 24 who had a warrant out for her arrest and was driving without a license. The deputy was forced to let her go because the jail doesn’t accommodate females.

Coe said the result is that “the scouts are females [and] the drivers are starting to be female.”

On June 25, law enforcement gave Border Patrol custody of a driver who was allegedly smuggling nine illegal immigrants, because the Kinney County jail was full. The driver, an illegal immigrant from Mexico, also had an active arrest warrant out for driving while intoxicated in San Antonio.

Border Patrol agents on the scene confirmed that they would most likely return the man back across the border without charging him with smuggling.

Frustrated by the lack of federal charges, a Texas State Trooper filed state charges against the driver so there would be an arrest warrant out for him for felony smuggling the next time he’s caught in the United States.

As law enforcement pursued the driver during the initial traffic stop, the driver stopped the vehicle and all of the occupants fled across the road, climbed a game fence onto a ranch, and attempted to evade arrest. Officers retrieved the driver and three illegal immigrants. Six others remained at large.

As the driver and the three illegal immigrants from Mexico were being detained, the ranch owner drove past and said he wanted them charged with trespassing on his land, a misdemeanor. But a full jail prevented charges from being laid. Instead, Border Patrol took custody to process the migrants and return them to Mexico.

Coe said he wants to stick illegal immigrants with any charges he can, so that it might deter them from coming to his county, but he doesn’t have the infrastructure to do it.

Neighboring Uvalde County Sheriff Ruben Nolasco has the same issues, especially with the spike in human smuggling in his county. Law enforcement is catching at least two loaded smuggling vehicles per day through Uvalde.

“It’s getting to the point that it’s filling up my jail. So that’s becoming a problem,” Nolasco told The Epoch Times.

If the jail is full, the smugglers will be processed and given a court date with the “hope that they’ll come back,” he said.

Illegal border apprehensions hit 180,034 in May, a 21-year monthly high, according to Customs and Border Protection statistics. So far this fiscal year, Border Patrol has apprehended almost half a million illegal aliens entering the state of Texas from Mexico.

Texas Gov. Greg Abbott issued a state disaster declaration on June 1, and on June 10, he said state resources will be deployed to enforce “all federal and state criminal laws such as criminal trespassing, smuggling, and human trafficking.”

The Texas Department of Public Safety (DPS) didn’t comment on whether the plan was to prioritize charging illegal aliens on private land, or just anyone they came into contact with, including those being smuggled in vehicles.

DPS Troopers have been involved in 413 vehicle pursuits along the Texas–Mexico border from March through June 24, DPS press secretary Ericka Miller told The Epoch Times.

DPS recently emptied the Briscoe Unit prison facility in Dilley, Texas, in preparation for the incarceration of illegal aliens arrested under state law. It’s a male-only unit with a capacity of 1,384 beds.

“It was determined that the Briscoe Unit was in a strategic location to house those arrested for committing a crime along the border and had adequate staffing to run the facility,” Abbott’s press secretary, Renae Eze, said in a statement on June 18.

The Texas Department of Criminal Justice told The Epoch Times on June 28 that no illegal immigrants had been placed in the facility yet.

BORDER: US citizen caught smuggling 7 Guatemalans in Kinney Co., Texas. Two in the trunk. Had borrowed the car from a family member. pic.twitter.com/yJ4v63BMI8

Coe said the facility in Dilley—almost 100 miles away—isn’t a practical solution for his county, as the transport back and forth is prohibitive with his limited resources.

“And even at that facility that will hold, say, 1,000 people, if everybody on the border’s doing it, then that facility’s going to fill up over a weekend. And then what?” he said.

Coe said if he had the guards, he’d set up tent space next to his detention facility to house more criminals. But he already has two jailer jobs open and lamented how low the wages are. “My head jailer, who’s been here 25 years, she makes $14 per hour.”

On June 25, Abbott issued a statewide call for jailers across the state to assist border sheriffs with operating detention facilities and providing jail beds for those arrested on state charges related to the border crisis.

Coe is hoping he can tap into some state resources to alleviate his jail space issue, but it’s not as immediate as he’d like.

The other bottleneck, he said, is that the district judge only hears felony cases coming out of Kinney County once per month.