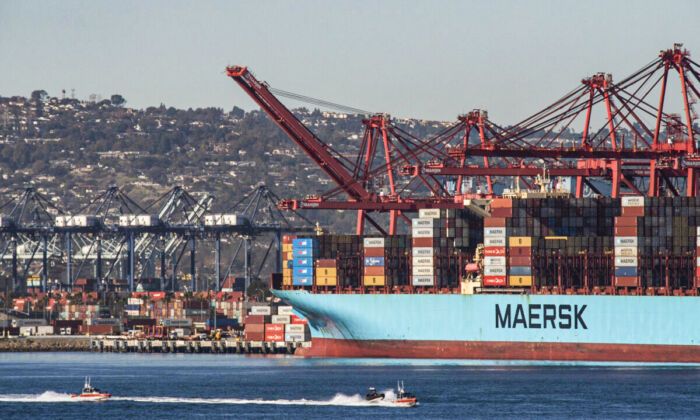 The number of ships headed to Southern California delivering goods to the twin ports was down to 59 on March 4, a big drop from the record 109 in January.

The slowdown has allowed port operators to clear cargo and get goods moving off the docks.

“We’re basically seeing the effects of the slowdown of the Lunar New Year,” Port of Los Angeles spokesman Phillip Sanfield told The Epoch Times. “We’re going to see a rebound of more cargo coming our way.”

Chinese factories and ports were shut down during the holiday, further lengthening transit times and tightening available containers.

Meanwhile, the Port of LA is making progress processing the container stockpile, which has been reduced by half, Sanfield said.

Cargo owners are expected to ramp up deliveries for the spring and summer as retailers replenish their inventory.

With several employees still out sick with COVID-19, the goods movement is not at full capacity, Loutit said.

The Port of Long Beach plans to see an early peak season this year, starting as soon as the summer but that shouldn’t increase the number of ships waiting to get into the port complex, Executive Director Mario Cordero told The Epoch Times.

The ports are seeing fewer ships waiting to enter the complex, Cordero said, because terminals are catching up on clearing cargo containers.

Long Beach reported about 13,200 containers stored for more than six days at its terminals on March 4. That was half the amount the port had in October.

The Long Beach port has reduced 70 percent of containers that are stored for more than nine days.

“Ultimately, this is a question of finding a means to increase capacity,” Cordero said.

In East Asia, the supply chain operates around the clock. The ports are working toward that goal, according to Cordero.

Experts predict it could be six to 12 months before the ports clear the backup and return to pre-pandemic operations.

The ongoing supply chain snarl is partially to blame for a slowdown in global growth in the next two years.

The International Monetary Fund (IMF), an organization that promotes international trade, has downgraded its growth outlook half a percentage point to 4.4 percent from October.

Growth is expected to show to 3.8 percent next year, according to the IMF, even if the economy picks up in the second half of 2022.