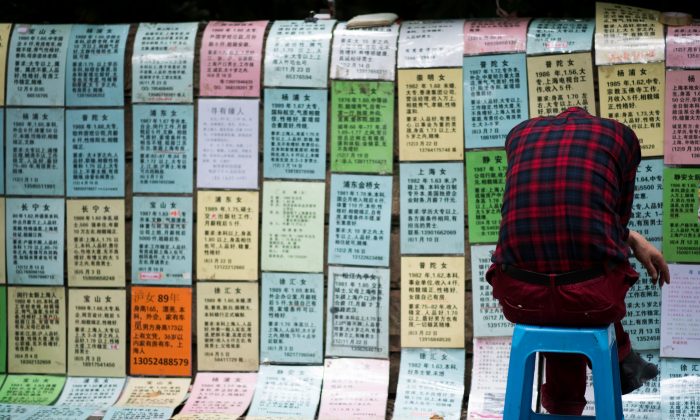 A Chinese man sleeps in front of advertising notices, placed there by parents of people looking for partners at a marriage market in Shanghai, China, on May 30, 2015. (Johannes Eisele/AFP/Getty Images)
Thinking About China

Fewer People Are Getting Married—Why?

The existentialist Soren Kierkegaard pondered many things—life, death, happiness, sadness, even the importance of birds and lilies. He also pondered the question of marriage.

What does this mean?

In truth, I don’t know. Does anyone?

But Kierkegaard, by all accounts, wasn’t a fan of marriage. Fast forward 200 years, and tens of millions of people around the world—from Shanghai to San Francisco—appear to share the Danish philosopher’s reservations. The question, though, is why?

To wed, or not to wed? That is the question. To that very question, an increasing number are responding with a rather resounding “no.”

In China, the marriage rate peaked in 2013; by 2020, the rate had decreased to 5.8 marriages per 1,000 people. According to state-run outlet China Daily, the desire of young Chinese people (ages 18 to 35) to get married has fallen for a number of reasons, including “high work pressure and great improvement in women’s education level and economic independence.” Another major reason involves the fact that Chinese men outnumber women by close to 35 million.

Meanwhile, in the United States, marriage rates are 6.1 per 1,000, the lowest they have been since the federal government began keeping data more than 150 years ago.

I reached out to Rollo Tomassi, a best-selling author who has written extensively on the topic of marriage. In his latest book, “The Rational Male–Religion,” Tomassi, a meticulous researcher, calls monogamous marriage “one of the bedrocks of success for Western civilization.”

In short, marriage is “a good idea.” Well, it used to be. Today, however, marriage is “one of the worst prospects imaginable for men.”

Because society has moved from the idea of covenant marriages to contractual marriages. The former refers to “how it should be done—religiously, personally, devotionally.” This is how marriage was done in the past. Meanwhile, the latter (“the way marriage is done now”) is, according to the author, “the worst legal contractual liability a man can enter into.” The contractual marriage “is one based on mutual support and an insurance [and assurance] that this support will continue even if the marriage itself dissolves.” Strong words, some will argue. Yes, strong but rather accurate.

In the United States, the origin of contractual marriages can be traced back to the rise of the no-fault divorce. Quite simply, a no-fault divorce doesn’t require a showing of wrongdoing by either party. Not surprisingly, California, once a liberal, free-loving utopia, was the first U.S. state to enact a no-fault divorce law. It was signed into effect in 1970 by then-Governor Ronald Reagan, a man who divorced and remarried.

To Wed, or Not to Wed

So one wonders, what does the future of marriage look like in America? Well, not great.

First, one study found that women find 80 percent of men physically unattractive. Who can blame them? The average American man is not in good shape.

Fifty-four million men are now overweight. Thirty-four million are obese. By 2030, 1 in 2 adults in the United States will be obese; 1 in 4 will be severely obese. So yes, women are also letting themselves go.

Of course, today, attraction is much more than skin deep. Besides being physically attractive, a man must also be economically attractive. What we’re seeing here is the “six-six-six” rule in play—women want a 6-foot-tall guy who makes six figures and sports a six-pack—and no, I don’t mean a six-pack of beer.

For the lucky (or unlucky) few who do get married, I have more bad news. Seventy percent of divorces are initiated by women. Meanwhile, college-educated women initiate divorce at a simply staggering rate: 90 percent. Considering women now make up 60 percent of college students, the future of marriage looks anything but rosy. In fact, it looks downright precarious.

Now, before I’m accused of being a misogynistic pig, let me state the following: I am not against women being educated. Far from it. My fiancée has a graduate degree. My mother is college-educated, as is my sister. I love all three women dearly. I’m simply stating that today’s college-educated women have far higher standards than, say, women of the 1980s, and many American men simply fail to measure up to these rather high standards. This is not some trivial issue. It’s serious, very serious.

In the United States, the married will soon be the minority. People who are married tend to live longer, healthier lives; they tend to experience lower levels of psychological distress and are less prone to suffering from chronic depression.

According to the authors of a peer-reviewed study published last year, compared to those who were married, men who found themselves single, divorced, or widowed were more likely to exhibit depressive symptoms. For women, being single was also associated with symptoms of depression.

Among men, according to the authors, “being single or being divorced/widowed were also associated with lower self-esteem at age 32, 42 and 52.”

Compared to being married, they said, “being single or being divorced/widowed were quite consistently associated with poorer mental well-being during the life course, especially among men.”

As Tomassi, a man who has been married for more than a quarter of a century, told me, today’s idea of marriage “is an old-order concept in a new-order world.”

Can marriage be saved, I asked?

“We’re not going to save marriage, at least not in the old-order sense,” he replied. Because “we’re still clinging to 20th-century ideals about marriage.” Basically, we’re using a broken compass to navigate new terrain.

“People still want to get married,” he said. However, “there’s very little incentive to get married,” largely because marriage has become “a no-win situation for men and a security insurance policy for women.” Today, both sexes “have more power and control over their lives outside of marriage than inside.”

Tomassi stressed that “men and women still inherently need each other, despite what either might say.” He believes that “we’re better together than we are apart.” Going forward, “committed heterosexual monogamy, however that looks, is the best way to form families and raise healthy children.”

Fundamentally, marriage still works, but only if we realize the rules have changed—dramatically so.