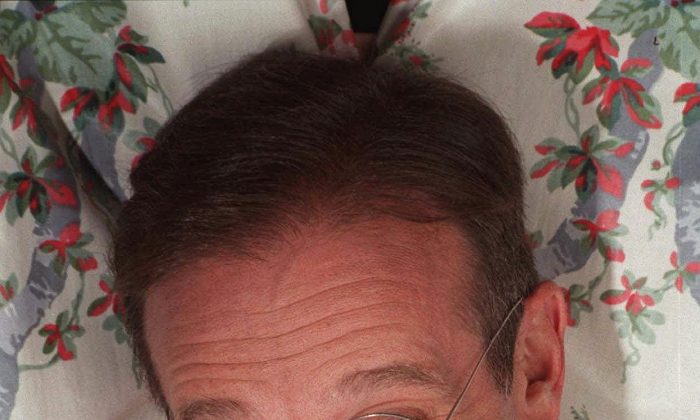 Robin Williams extends his head between curtains in a New York hotel on Nov. 15, 1997. Williams died Monday in an apparent suicide. He was 63. (AP Photo/Jim Cooper)
News

Robin Williams was brilliant, and kind, and ill. I wish he had been able to stay with us. I am sorry for the grief of those who loved him. As his family hoped, I will remember his talent, his contributions, and his humor.

Most people who have a mental illness do not kill themselves, according to a fact sheet about suicide from the University of Washington. About 20 percent of human beings have a diagnosable mental illness. A small minority of those, between 4 and 15 percent for certain illnesses, attempt or commit suicide.

But 90 percent of people who do kill themselves have some kind of mental illness.

Major depression and schizophrenia are associated with suicide. Substance abuse and bipolar disorder increase the risk.

Professor Jay P. Singh, Ph.D., is an expert on suicide and mental illness, research and treatment, based in Washington. As he described the symptoms of bipolar disorder, it sounded like an aspect of Robin Williams’s comedy. During a manic episode, a person may engage in “pressured speech, a flight of thought, with so many thoughts rushing through your head.” Mania entails having too much energy, not needing sleep, feeling invincible.

People are not at the greatest risk of suicide when they are in the depth of depression, according to Singh. Major depression, of course, is far beyond the blues and sorrows of normal life. It’s a prolonged, more than two weeks, period of having trouble being able to work, sleep, eat, or socialize. “That’s the line between blues and clinical depression.” In that state, a person may think of ending his life, but not be able to muster the strength to take any kind of action, including suicide.

Danger, for a clinically depressed or a bipolar person, can come as he begins to improve, or as he begins to descend into depression from the electric state of mania. “That’s when the greatest risk is,” said Singh.

But no one should be overly vigilant about his mentally ill friends and relatives dying. That would not be helpful, according to Singh. The most important thing to remember “is that what you are dealing with is a biological disorder.”

Professional treatment can work. Cognitive-behavioral therapy is “quite effective.” Some medications help. Various kinds of talk and supportive therapy improve well-being, according to Singh.

“You wouldn’t tell a person with cancer or heart disease to pull themselves together,” said Singh. You would encourage him to see a doctor.

I have lost more than one friend to suicide. One, an artist, was hospitalized for disabling mental illness in her early thirties. Her death from a Tylenol overdose came a few months after she was discharged from the hospital. Another, a 17-year-old, suffered from depression. Perhaps in an effort to soften his anguish, George took drugs and drank as well. He shot himself.

I have always suspected that another friend welcomed his fatal single-car accident. At lunch, Ed gave away his lucky Buckeye, a large, smooth nut traditionally carried in the South. He pulled out his credit card and paid the tab for the whole, large group. He joked, “Hope I die before the bill comes.” He did.

If they had survived their times of crisis, I think they might have had good lives.

“One positive is that 30 million more Americans are scheduled to get mental health care,” because of the Affordable Care Act, said Singh. America spends $2.6 trillion on health care, but a very small amount on mental health services. The ACA requires insurance to cover mental health treatment the same way it covers other medical treatment.

“People always ask me what could have been done,” said Singh. “At the end of the day, the rate of suicide is quite low.”

If you have a loved one in a psychiatric facility, a simple gesture like writing a letter to the person to say you love him “can elevate mood,” according to Singh.

It’s important to know that treatments work, and that people who have severe challenges can have rewarding, meaningful lives.

The subject can be discussed. “The stigma is so much lower,” said Singh.