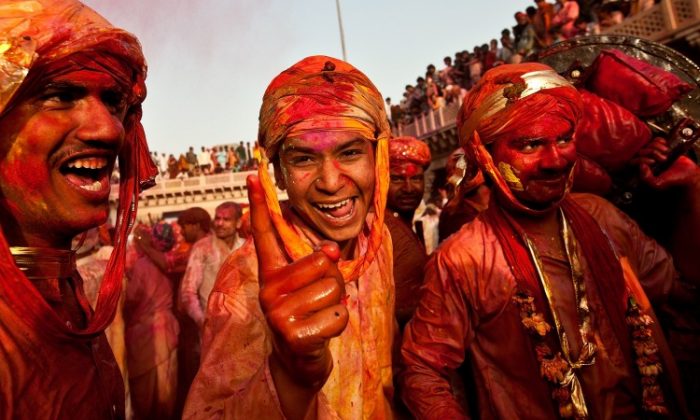 People light oil lamps to celeberate Diwali, the festival of lights. It’s celebrated throughout the Indian subcontinent and in Indian communities around the world during the autumn harvest season in October or November. (Sanjay Kanojia/AFP/Getty Images)
India

The Indian communities celebrate a diversity of festivals throughout the year that hold a great cultural value in the community life. Here’s what 2013 has in store:

A festival of colors; Indians celebrate Holi spraying each other with powder colors, water, and wild festivities around the country. The celebrations officially usher in spring.

One of the biggest of all the festivals in the Indian state of Kerala, Thrissur Pooram is celebrated in Thrissur, the cultural capital of the state. The festival is adjudged by UNESCO as the “most spectacular festival event on the planet.”

The celebrations are held for 36 hours from the morning of the starting day, where hundred thousands of people dance to the tunes of traditional Kerala instruments. The highlight of the festival is many elephants that participate in the festival rituals.

Gudi Padwa is celebrated in the Indian states of Maharashtra, Goa, and parts of Karnataka to mark the beginning of the Indian new year. The most important event on the day is the hoisting of a green or yellow silk flag on a bamboo staff (called Gudi).

A bright garlanded goblet is hung on top of the flag pole, along with neem and mango leaves, garland of red flowers, and gaohi (sweet). Rangoli designs made of rice, dry flour, colored sand or even flower petals are drawn near the Gudi or in front of the house.

Raksha Bandan celebrates the relationship between brothers and sisters. The festival is marked by the tying of a rakhi (sacred decorative thread by a sister on the wrist of her brother. The brother in return offers a gift to his sister and vows to look after her as she presents sweets to him. The brother also presents gifts to his sister.

Celebrated for 10 days across the state of Kerala, Onam is marked by intricate floral mats, scrumptious feasts, snake boat races, folk dances, and folk music in the community. The festival is celebrated across the discrimination of faith, caste and creed. The snake boat race (Vallamkali) is the most amazing sight of Onam wherein, large snake-like boats decked with ornaments and colorful umbrellas take part in the festival race.

Deepavali (or Diwali) is the festival of lights, celebrated in India and abroad to mark the victory of good over evil. Families perform traditional activities at home: deck home with earthen lamps, candles, and lights in the night. People wear new clothes, share sweets, and snacks with family and friends.