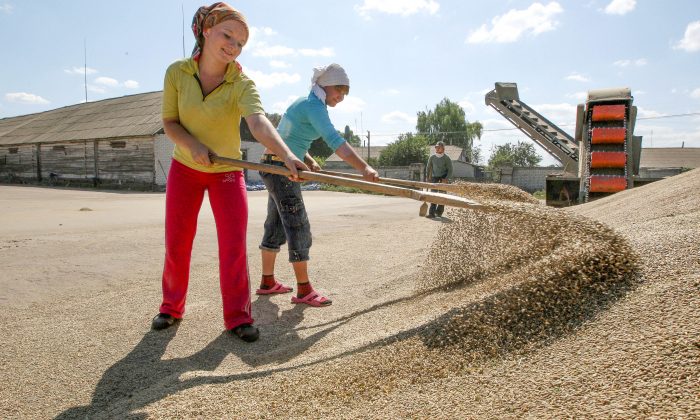 Women sweep grain near the village of Zhovtneve, Ukraine on Aug. 11, 2009. Many Ukrainian farmers do not have access to large retail networks, but farming cooperatives are increasingly providing support. (Genya Savilov/AFP/Getty Images)
Europe

Ukraine one of top food producers, yet most food imported
By Eugene Dovbush

KYIV, Ukraine—Though considered one of the world’s main breadbaskets, Ukraine imports much of its food. Many local farmers don’t have access to large supermarkets, but farm cooperatives are starting to help.

The Food and Agriculture Organization of the United Nations included Ukraine in a list of the main world breadbaskets along with Russia, Kazakhstan, and Argentina. By volume of grain, Ukraine is fifth among the leading world exporters, and by volume of sunflower oil export, it is No. 1.

These advantages come to naught, however, as independent farmers are hindered by the tax system and competition with transnational retail networks. Ukraine imports many crops traditionally grown in the country—potatoes arrive from Egypt, apples from Holland, cucumbers and tomatoes from Turkey.

About 70 percent of the food sold at one of the large-scale, local markets, METRO Cash & Carry Ukraine, is imported, according to United States Agency for International Development’s (USAID) AgroInvest project. The project is based in Ukraine to help with the country’s agricultural development.

“Year to year businesses consolidate,” Mykola Hrytsenko, an expert working on AgroInvest said. “Transnational retail networks appear which a [farmer] cannot penetrate.” He said the need to create cooperatives is increasing in Ukraine and in the rest of the world.

“What does a cooperative give us?” asked Valentyn Lutsenko, director of Ivankovetsy’s Dawn cooperative founded in 2006 to unite dairy farmers. “[It gives us] an increase in revenue from milk sales … a reduction of milk production cost price, [and the ability to] form quality raw milk batches,” he said.

It connects the farmers to buyers, helping generate revenue. He said it also costs less as a cooperative to buy corn feed for the cows, reducing production prices. He said the 112 members of his cooperative earn 30 percent more per liter (about 1.05 quarts) than other producers in the region.

One of the main factors deterring Ukrainian farmers from joining cooperatives, said Hyrtsenko, is the value-added tax (VAT). Larger agricultural companies get full VAT rebates for the required 20 percent paid to the state. Individual farmers selling independently through a cooperative, however, must pay the VAT without rebate.

“This way we drive our small producers into a shadow economy,” Hyrtsenko said. “It’s easier for them to sell milk, vegetables, [and] fruit along a roadside, since then you don’t have to pay VAT.”

In January 2013, Ukrainian President Viktor Yanukovych signed into law a bill aimed at promoting cooperatives. Experts praised the law, but say hindrances such as VAT must be removed. Currently, 855 farming cooperatives operate in Ukraine.

Hrytsenko said education will be important in urging the common farmer to join a cooperative. Proof of cooperative success will also be key.

“Only with real examples can we convince people,” Hrytsenko said. “We need to unite and assist in creating pilot model cooperatives. Today all [farmers] ask: ‘Where can we go to see how it works? Give me an address!’”