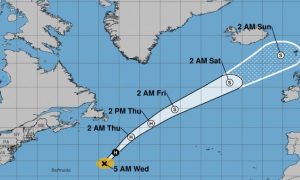 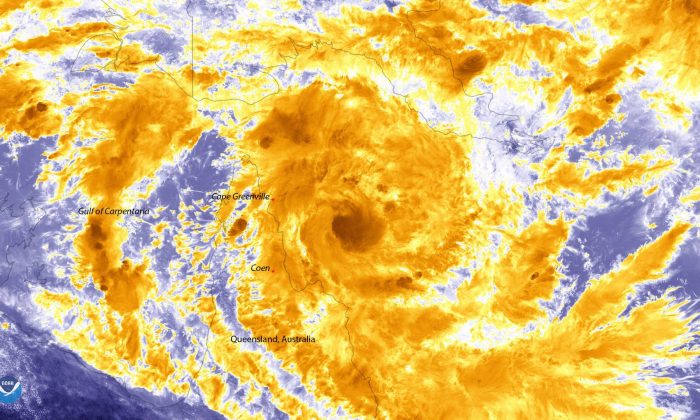 The mayor of a remote far north Queensland community says Cyclone Trevor was “ferocious” and the worst he has endured.

The cyclone made landfall just south of Lockhart River as a category three storm late on March 20, dumping more than 200mm of rain in just six hours and bringing wind gusts of more than 130km/h.

Severe Tropical Cyclone Trevor made landfall on the Cape York Peninsula on Tuesday and is expected to plow westward into the Gulf of Carpentaria, threatening parts of the Northern Territory later this week: https://t.co/QdWUW6PsFX pic.twitter.com/dRT0bvIO8Q

It has since weakened to a category one system and is expected to pass just north of Aurukun on the west coast of Cape York before re-intensifying into a category four storm as it pushes towards the Northern Territory.

“It was ferocious—the wind was just constant between 4 p.m. and midnight,” he told AAP on Wednesday morning.

“This was probably the worst one … this one basically sat near the community and hounded us for hours.

“I’ve got a timber house and I could feel it shaking.”

Lockhart River resident Hannah Brown posted on Facebook that they had spent the evening “getting absolutely smashed.”

“We’re okay at the Lockhart River aerodrome, lots of destruction after a horrid night,” she wrote.

Cr Butcher said he would spend the morning in the community assessing the damage with police and other emergency crews.

‘We’ve got a few trees across houses and a few sheds have gone flying,” he said.

Damaging to very destructive winds in the core of tropical #cycloneTrevor. Some images of damage from #LockhartRiver. For cyclone preparedness and safety advice: https://t.co/3AD7YyJhdg. For emergency assistance call Qld SES on 132 500 or 000. For info: https://t.co/Tw65a1FNqM pic.twitter.com/LF8fSP4Ii4

The cyclone warning for the east coast has since been cancelled, but the danger is not entirely over.

Jess Gardner from the Bureau of Meteorology has warned flooding will be a high risk across the cape over the coming days.

“We’re going to see large falls right up to next Friday with chances of flash flooding,” she told AAP.

“It will be very dangerous.”

Roads and schools remain closed across the cape and residents are warned not to risk driving on flooded roads.

Sitting in Garage running up generators.
15 mins each.
Using big Industrial Fan as a load source.
And sitting in front of it…..
Big one 6.5 kva, 2 small 2kva each. Or joined with Parallel cable (as they are ATM) 4kva
Cyclone Trevor a long way away.
These due for a run anyway. pic.twitter.com/sY0el1WjVi