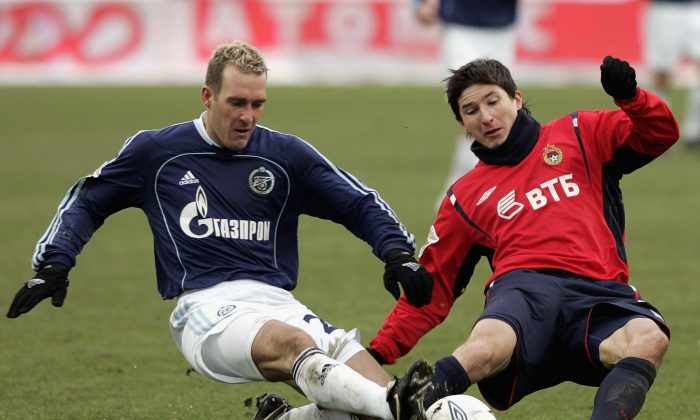 Dutch publication Telegraaf reported that Ricksen, 37, has ALS, which is also known as Lou Gehrig’s disease. He made the announcement on a Dutch television show.

The paper reported that he was diagnosed earlier this week.

Ricksen appeared visibly emotional on the show when he said he was diagnosed with the illness.

During his career, he played for Fortuna Sittard, AZ, Glasgow Rangers, and Zenit St Petersburg. He also played 12 matches for Oranje. Overall, he played more than 400 matches during his career. Ricksen is a now a coach with Sittard in Holland, and it is unclear if he will continue.

Ricksen is slated to publish an autobiography of his life and career.

ALS, a debilitating illness, characterized by progressive muscle atrophy, difficulty speaking, and difficulty breathing. It is possible for someone diagnosed with the disease to die within a few years.

In previous reports, Ricksen admitted to living a relatively hard life, with lots of drinking and partying.

“After a match I’d stay up drinking until four or five in the morning and I’d spend the rest of my week quietly. Train, play, drink, train, play, drink,” he told the Daily Record in August. “If you trained well and looked after yourself, you could last out a long time. I took good care not to take to the field when I was drunk.”

But he added that “90 percent of footballers do what I used to do. I can assure you that out of the 20 players under contract at the club, 16 of them would stay up drinking deep into the night – and they’d sometimes play matches with a hangover.”

“I have attended a clinic and have been to meetings. I know I have a problem, and I say, ‘I am an alcoholic,’” he said. “I can’t promise never to drink again. Perhaps I can for one day. I have my ups and downs. I have drawn up a program for myself and I try to stick to it … Hopefully I won’t be drinking any more in 10 years.”