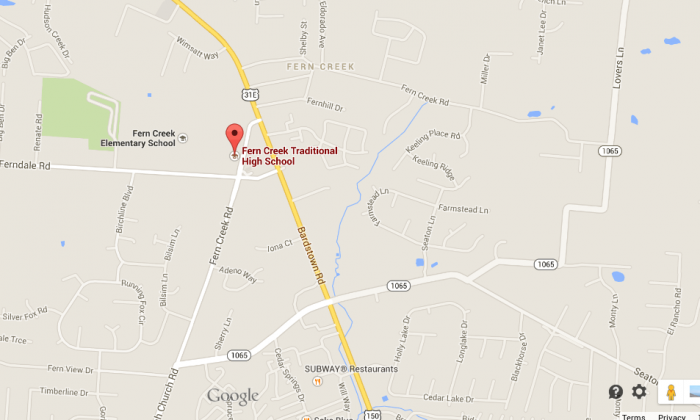 Shots have been reported at Fern Creek High School in Louisville, Kentucky on Tuesday.

Police and first responders have rushed to the school after the reports.

At least one person was loaded on a stretcher onto an ambulance, reported WLKY. That victim, a student, was taken to the University of Louisville hospital.

The shots fired report was called in shortly after 1 p.m. Several students reported seeing a firearm.

A student said via Twitter that an airsoft BB gun was the firearm. “I was right there when he did it,” the student said.

Kelly Davis of WDRB reported that the shooter has not been located. Police aren’t releasing any information about the shooter’s identity as of yet. Katie Bauer of Wave 3 later added that the police “is calling this shooting an isolated incident, saying the gunman shot one student, then fled the scene.”

Davis said that the confirmed victim has non-life threatening injuries and that the parents have been notified.

Photo: Students evacuated with hands over heads from Fern Creek High School in Louisville after shots fired on campus pic.twitter.com/G3pp9NFmb0

“If your student is a Fern Creek student, and you have not gotten a call from Metro Police, your child has not been injured,” noted WLKY.

The school is located at 9115 Fern Creek Road about 10 miles southeast of downtown Louisville.

Nearby Fern Creek Elementary School and St. Gabriel School are also locked down as a precaution.

Parents are being sent to Fern Creek Park as students are slowly released.