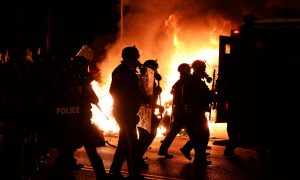 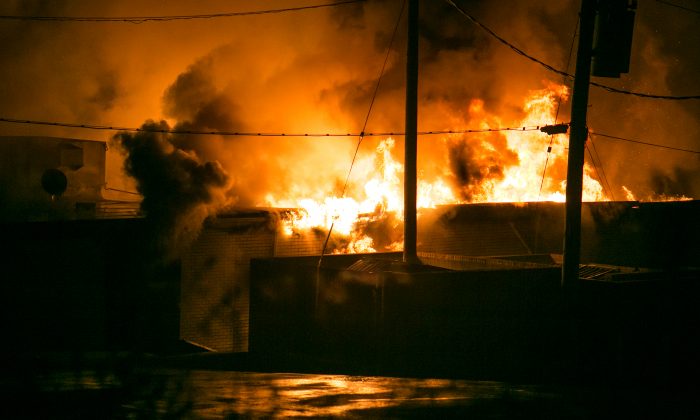 A strip mall burns after demonstrators set it on fire in Ferguson, Mo., on Nov. 24, 2014. Activists took to the streets after a grand jury decided not to indict Ferguson police officer Darren Wilson. (Benjamin Chasteen/Epoch Times)
Ferguson

ST. LOUIS, Mo.—In the end, all of the fears of violence and police brutality became a self-fulfilling prophecy of epic proportions. The announcement that everyone had been awaiting, anticipating, dreading, and predicting finally came. Darren Wilson, the Ferguson, Missouri police officer who shot and killed unarmed teen Michael Brown, was not indicted by the grand jury. He will not face a judge or jury of his peers. This chapter is closed and he is free to go on with his life.

For the rest of St. Louis, Monday night marked the beginning. The streets began to fill with people in the suburbs of Ferguson and Shaw as they waited for the late evening announcement. The official announcement time of 8 p.m. came and went, and at last St. Louis County Prosecutor Bob McCulloch made the announcement that sparked off what can only be described as a night from hell: no indictment.

The protesting started almost immediately. Though many protesters had repeatedly called for and endorsed non-violence and police had promised restraint and professionalism, utter mayhem ensued.

By 11 p.m., Ferguson’s main streets were a wasteland of broken glass and bricks. The hulls of two police cars smoldered just outside of the Ferguson police station and fire department, neatly parked to the side as yellow flames licked at what was left to burn. Too many storefronts to count displayed plate-glass windows with a single, enormous hole in the middle and signs reading “closed until further notice, sorry for the inconvenience.”

Even in the ugliness of what’s worst in people, some of Ferguson’s small-town gentility endured.

The rest of the unburned police vehicles blocked Ferguson’s West Florissant Avenue. Department of Corrections buses, police cars, and police officers in full riot gear filled the street. As they marched up and down Florissant with footsteps that echoed like Darth Vader’s storm troopers, the few remaining onlookers stared curiously.

“I heard everyone’s carrying now, they all strapped up,” one young man said to his friend casually. He meant every person had a gun. He couldn’t answer when asked if people had guns because they were angry or scared. All of the rhetoric from activists, protesters, police, and officials rang hollow in that moment.

Ferguson has declared war on itself.

South Florissant, the other side of town that’s predominately black, where last summer’s violence shocked the nation, made the earlier scene look like a G-rated movie.

The smoke and fire from buildings engulfed in flames could be seen from miles away. It lit up the sky with an eerie red glow and created so much smoke it could have almost been mistaken for clouds. What used to be a Metro PCS cell phone store was fully engaged in a five-alarm fire. Not a firefighter was in sight as the flames reached almost to the electrical lines just above the store.

“We’re over here in Africa. They don’t care about us,” one man said with frustration as he stood with a small group of onlookers on a hillside above the fire. The man said the fire department had come earlier with trucks, made a U-turn and driven away. “They just let it burn! They don’t care.”

Police later said that firefighters came and heard gunshots. Fearing that they were being fired upon, they fled. “That’s not part of their deal, so they left,” one officer said.

Though it was about two city blocks away, the heat from the flames warmed the bitterly cold night air just enough to make it an oddly comfortable seat from which to witness the confounding chaos below. At street level, there was nothing but police, reporters, and a cherry red fire engine with a lifeless hose stretched across the road in the general direction of the building. They seemed to be saying: just let it burn.

From time to time, distant rat-a-tat-tats of gunfire and pops of explosions could be heard in the direction of the makeshift memorial of teddy bears now piled in the street where Michael Brown was shot. Here too, the street was littered with glass and bricks, and the windows of nearly every business had been shattered. A lonely freestanding ATM that had been smashed into oblivion and partially pried open emitted an eerie mechanical groan. “Errrr. Errrr. Errr.”

Ferguson, and particularly this part of town, can only be described as ground zero in what has become a national wave of protests against police brutality. Yet for all those among the protesters who are peaceful and have zero intention of inflicting harm, there are enough criminals in the mix that it has become dangerous for everyone.

“What we saw tonight was much worse than what we saw any night in August. Bricks were thrown at police officers, two St. Louis County police cars were set on fire and police seized an automatic weapon.”

South of Ferguson in the suburb of Shaw there was a similar, though less violent, scene. Just around the corner from the only safe house the city formally agreed to last week, Mokabe’s Coffeehouse was full of angry protesters in a standoff with heavily armed and police outfitted in full riot gear.

“Disperse immediately,” yelled one officer over a loudspeaker, warning that they would be arrested.

The protesters, mostly young and both black and white, stood on Mokabe’s outdoor deck, screaming at police.

“This is a safe house! Do you know that this business has been here for 10 years?” one woman screamed. “This place is supposed to be a safe space and you threw tear gas at us!”

They said later that police had stormed the coffee house unprovoked and tossed canisters of tear gas inside. The pungent, bitter smell of the noxious gas still hung heavy in the air. People who had been inside at the time were hysterical.

“They attacked us, I don’t know why,” one young woman said.

In the end, the police didn’t arrest anyone. Instead they marched off, swallowed by the deep dark of night. But they weren’t gone.

Less than an hour later, a small band of marauding men with bandanas over their faces milled aimlessly at the intersection of South Grand and Arsenal within view of Mokabe’s. They half-heartedly ripped some plywood off a storefront window and then walked to the street where they blocked the few cars still out and about. It’s a tactic commonly used throughout the protests here, to force drivers to show support. Every car got safe passage until an unmarked police car approached.

“Get out of the street!” yelled a man’s voice, piercing the night with anger and a surprising degree of authority. One of the masked men, perhaps unaware that the man was a police officer, approached the vehicle threateningly. In a few startling moments, the officer was out of the car with at least a dozen other police who appeared out of nowhere.

They pushed and shoved the men into submission, slamming one young man’s head into the pavement. At least two were arrested.

Witnesses to the scene later bemoaned all of it.

“This is just embarrassing,” said one man who is a lifelong resident of the city. “This isn’t the St. Louis I know.”