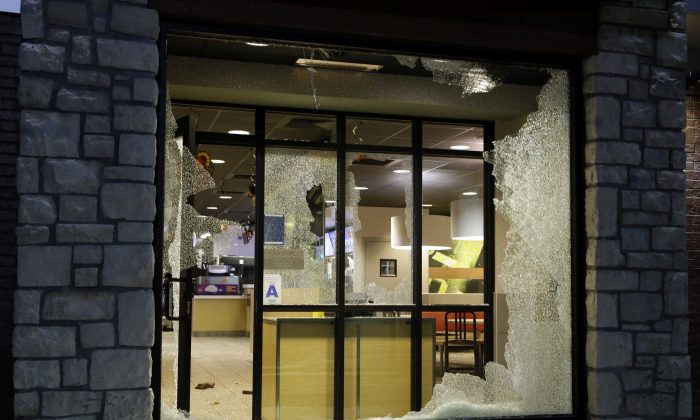 A store is vandalized after the announcement of the grand jury decision Monday, Nov. 24, 2014, in Ferguson, Mo. A grand jury has decided not to indict Ferguson police officer Darren Wilson in the death of Michael Brown, the unarmed, black 18-year-old whose fatal shooting sparked sometimes violent protests. (AP Photo/Jeff Roberson)
Ferguson

A Walgreens in Ferguson, Missouri, was reportedly set on fire after protests erupted on Monday night. Interstate 44 was also reportedly shut down, a McDonald’s was looted, a Little Caesars was set on fire, and a Dollar Tree store was looted.

Photos uploaded to Twitter showed the store on fire with smoke pouring out of it.

The fire is likely linked to protests that were sparked after a grand jury issued a decision not to indict police officer Darren Wilson in the shooting death of teenager Michael Brown.

The FAA issued a no-fly zone over St. Louis and Ferguson.

MOMENTS AGO: @Walgreens looted and is still smoldering from fire. #ferguson https://t.co/kVvcgBbRKb” (@michaelcalhoun)

Another cruiser on fire pic.twitter.com/eBPYIBGAYD

Walgreens is on fire. Flames shooting from within the building #Ferguson pic.twitter.com/1sKVl3FVun

Walgreens on fire and people are rushing in before it burns down to loot more goods. #Ferguson pic.twitter.com/OrcjYDwA1t

Walgreens is on fire. #Ferguson pic.twitter.com/Hqwu3WfFm8