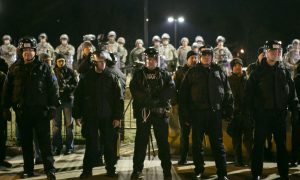 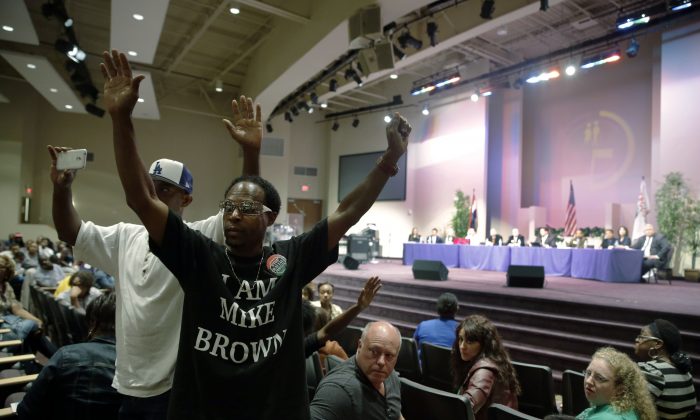 FILE - In this Sept. 9, 2014 file photo, Marurice Brown raises his arms during a public comments portion of a meeting of the Ferguson City Council, back right, in Ferguson, Mo. A lawsuit filed Wednesday seeks protection from a state statute that requires a name and address on political flyers. (AP Photo/Jeff Roberson, File)
US

A local business owner and resident of the embattled small town of Ferguson, Missouri, is suing the state for the right to anonymous political speech. The man, who filed the lawsuit on Wednesday under the pseudonym John Doe to protect his identity, has said he fears “retaliation” if he exercises his First Amendment right.

The complaint, filed in Missouri U.S. District Court, states that Doe wants to anonymously publish and circulate flyers advocating on behalf of one candidate for the upcoming April 7 Ferguson City Council elections. The flyers would also contain information against another candidate. He said through the complaint that he fears “retaliation by Ferguson officials for the content of his political speech,” and doesn’t want to include his name and address on the flyer.

The right to anonymous political speech is a protected First Amendment right, and can include activities such as attending a political rally or protest march with concealed identity or publishing and distributing political pamphlets.

Missouri’s American Civil Liberties Union (ACLU) filed the complaint on Doe’s behalf. According to Tony Rothert, legal director of the ACLU of Missouri, the First Amendment’s protection for political speech exists to encourage robust political debate and has played an important role in American political history.

Ferguson’s city council is made up of six council members and the mayor, each of whom serve for three-year terms. The council is responsible for setting city policies and ordinances.

The election in April is particularly important given recent revelations in the U.S. Department of Justice’s report on Ferguson’s systematic racial bias against blacks and abuse of legal power to entrench residents in an expensive cycle of misdemeanor charges aimed to bring revenue to the local court system.

The Missouri statute in question, which was most recently revised on Aug. 28, 2014, requires that anybody who publishes political campaign material must indicate who paid for the material and include their name and address. Violation of the statute is considered a misdemeanor.

The ACLU lawsuit was filed on the basis of a 20-year-old judgment by the Supreme Court, which ruled that such activities are protected under the First Amendment.