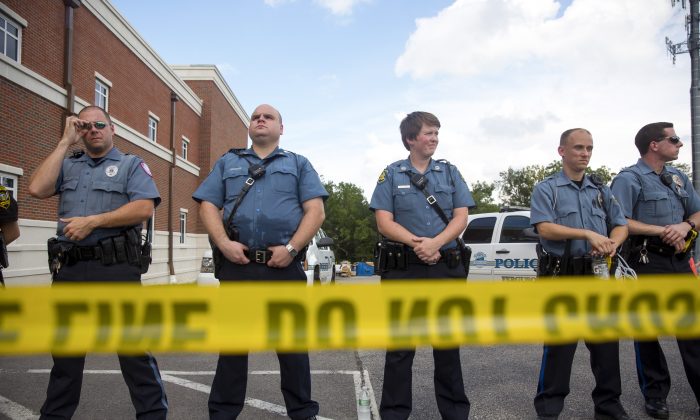 Ferguson police officers stand guard during a rally for Michael Brown outside their headquarters in Ferguson, Mo., on Aug. 30, 2014. ( Aaron P. Bernstein/Getty Images)
US

Each month, Ferguson municipal court passes on to the city’s police department supervisors a list of officer names, their squads, and the number of tickets they issued. Supervisors then post the list inside their police station, as a way to motivate their patrol officers into writing up more citations.

One patrol supervisor criticized his sergeant because the squad had issued just 25 tickets in a month. One of the officers had spent three days just on traffic stops, and issued 11 tickets to six people. Still, it wasn’t enough. The city needed more money.

Ferguson’s finance director wrote to Police Chief Thomas Jackson in March 2010, “Unless ticket writing ramps up significantly before the end of the year, it will be hard to significantly raise collections next year.”

That year, the court collected $1.3 million in fines and fees, a sizable 12 percent of the whole city’s total revenues. But within five years, the police department would ramp up its ticket-writing to bring their fines collection in fiscal year 2015 to more than double the 2010 number—over $3 million.

In a scathing 102-page report released by the Department of Justice Wednesday, federal authorities detailed a history of policies in the Ferguson Police Department (FPD) that stressed revenue generation over actual crime-fighting—policies that overwhelmingly targeted the city’s black residents.

In most of these stops, officers did not have reasonable suspicion that any criminal activity was going on—violating their Fourth Amendment right from unreasonable searches and seizures. The underlying reason for the stops was an aggressive effort to ticket residents and bring in revenue for the city.

“Partly as a consequence of city and FPD priorities, many officers appear to see some residents, especially those who live in Ferguson’s predominantly African-American neighborhoods, less as constituents to be protected than as potential offenders and sources of revenue,” the report said.

The report was the result of a six-month-long investigation, prompted by the death of Michael Brown, a black teenager who was shot and killed by Officer Darren Wilson last August. The Justice Department opened up an investigation into both Brown’s case and the Ferguson Police Department at large.

U.S. Attorney General Eric Holder announced Wednesday that the Justice Department would not bring federal civil rights charges against Officer Wilson, but he said the department’s probe of the Ferguson police revealed a culture of “implicit and explicit racial bias” that discriminated against the city’s black residents and routinely violated their constitutional rights. This in turn deepened residents’ distrust of police officers and contributed to the racial tensions that reached a boiling point following Brown’s death.

National Bar Association Calls for Darren Wilson to Be Indicted

“Although some community perceptions of Michael Brown’s tragic death may not have been accurate, the widespread conditions that these perceptions were based upon, and the climate that gave rise to them, were all too real,” Holder said at a press conference in Washington, D.C. Wednesday afternoon.

The report gives an example that occurred in 2012, when a 32 year-old African-American man was sitting in his car after playing basketball in a public park. A police officer noticed his car had windows that were more heavily tinted than Ferguson laws allowed. The officer approached him and demanded identification. The officer proceeded to accuse the man of being a pedophile, and ordered him out of his car for a pat-down search, though the officer had no reason to believe the man was armed.

When the officer demanded to search the man’s car, he refused, citing his constitutional rights. The officer then drew his gun and pointed it at his head. The officer arrested him on eight different law violations, including “making a false declaration” because the man initially gave his name as Mike, instead of his full name Michael. Those charges caused the man to lose his contractor job.

Bringing in the Money

Not only were police officers evaluated in performance reviews for their ability to bring in tickets, the municipal court gave out arrest warrants—primarily to the city’s black residents—as a means to “compel the payment of fines and fees that advance the city’s financial interests,” the report said.

In 2013 alone, the court issued over 9,000 warrants for minor violations such as traffic tickets and breaking parking rules. People who did not appear for their court date or who could not afford their fines were often arrested and jailed. That year, African-Americans accounted for 92 percent of people who were given arrest warrants by the court.

The report concluded that the disproportionate involvement of black residents in the criminal justice system was the result of racial discrimination on the part of police and city officials, not by any difference in the rates at which people of different races break the law. Federal authorities explained that they found incriminating emails where police and court employees expressed racist comments based on stereotypes about African-Americans.

One email, for example, dated November 2008, stated that President Barack Obama would not be president for long because “what black man holds a steady job for four years.”

On Wednesday, Holder urged Ferguson officials to “take immediate, wholesale, and structural corrective action.” He warned that if the city does not change its ways, the Justice Department will force compliance by all means possible. “Nothing is off the table,” Holder said.