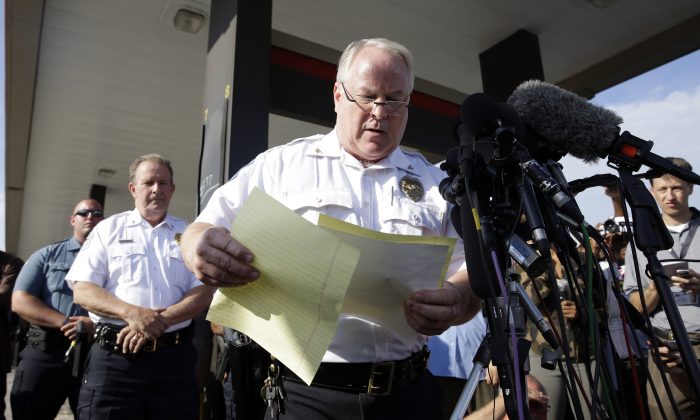 Ferguson Police Chief Thomas Jackson lied when he said he had received many requests for the videotape that purportedly shows Michael Brown, the teen who was killed in the Missouri city, robbing a convenience store.

Jackson told reporters on August 15: “All I did — what I did was — was release the videotape to you, because I had to. I’d been sitting on it, but I — too many people put in a [Freedom of Information Act] request for that thing, and I had to release that tape to you.”

The release of the tape added another dimension to the national conversation about the killing of Brown, who some witnesses say was running away from the officer who shot him while others said he was advancing toward the officer.

Matthew Keys of The Blot says that the police department actually didn’t receive any specific requests for the video.

“A review of open records requests sent to the Ferguson Police Department found that no news organization, reporter or individual specifically sought the release of the surveillance tape before police distributed it on Aug. 15,” Keys said.

One reporter, Joel Currier with the St. Louis Post-Dispatch, who asked for any and all evidence “leading up to” Brown’s death in a FOIA request but did not ask specifically for the tape.

“I can’t recall if I knew of robbery at the time of request. I made it broad in hopes of getting as much material as possible,” Currier said on Twitter.

“I think I may have been hearing rumors of a robbery but nothing confirmed.”

Journalist Andrew Perez added on Twitter that when he contacted Ferguson police spokesman Tim Zoll, Zoll couldn’t think of any specific requests for the video.