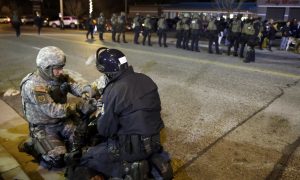 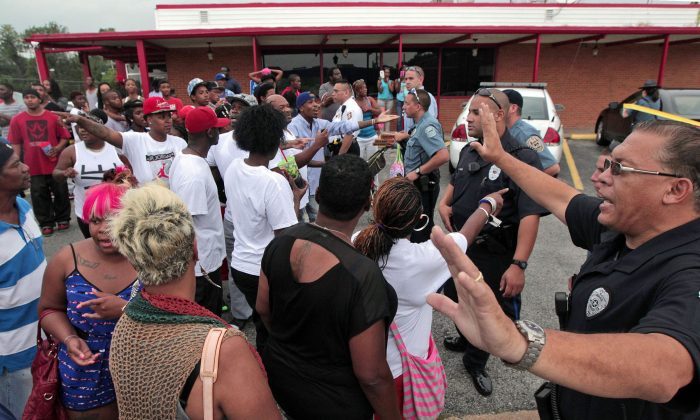 Ferguson police officers try to calm down a crowd on Aug. 9, 2014, near the scene where 18-year-old Michael Brown was fatally shot by a police officer in Ferguson, Mo. Departments around the country have in recent years stepped up their training in "de-escalation" — the art of defusing a tense situation with a word or a gesture instead of being confrontational or reaching for a weapon. (AP Photo/St. Louis Post-Dispatch, Huy Mach)
Ferguson

SEATTLE—The grand jury that declined to indict Ferguson police officer Darren Wilson was focused on whether he might have acted in self-defense when he shot and killed unarmed, 18-year-old Michael Brown.

But the case raises another question: Could Wilson have avoided getting into a spot where he had to make that split-second, life-or-death decision?

Departments around the country have in recent years stepped up their training in “de-escalation” — the art of defusing a tense situation with a word or a gesture instead of being confrontational or reaching for a weapon.

Proponents, including the Justice Department, say the approach can improve trust and understanding between police and residents, curtail the unnecessary use of force and improve the safety of officers and civilians alike.

“We haven’t taught officers to just walk away,” said Cambridge, Massachusetts, Police Commissioner Robert Haas. “But if the only reason a person is acting up is because you’re standing there … isn’t that a viable approach?”

Haas and other law enforcement officials said they didn’t want to second-guess Wilson’s actions because they weren’t in his shoes at the time of the Aug. 9 shooting.

But, many said, the case should accelerate a national discussion about police culture and the potential for broader training in de-escalation, which is considered especially important in dealing with people in mental health or drug-related crises.

In Missouri this month, a federal law enforcement team held training with St. Louis-area police, including top commanders from Ferguson, on how unintentional bias affects police work. That approach goes hand-in-hand with de-escalation.

“In every police encounter, the officer and the civilian bring with them and see the world through their experiences. The more these views diverge, the more they immediately see the other as a threat,” said Jenny Durkan, the former U.S. attorney in Seattle who led the effort to curb excessive uses of force by city police.

According to Wilson’s grand jury testimony, Brown and a friend were walking down the middle of the street when he drove up and asked them to use the sidewalk. When they declined, he suggested it again. Brown responded by cursing at him, Wilson said. He backed up his vehicle to confront Brown, who was carrying stolen cigars.

Brown shoved the vehicle’s door shut as Wilson tried to open it, and then attacked the officer through the door’s open window, Wilson said. The officer began shooting, then got out of the car, chased Brown, and fired some more when Brown turned around.

In its investigations of police agencies, the Justice Department has singled out poor de-escalation tactics.

In a July report on the Newark, New Jersey, department, the DOJ faulted a “pattern and practice of taking immediate offensive action” rather than acting within the bounds of the Constitution and displaying the “thick skin and patience” needed for the job.

In Seattle and in Albuquerque, New Mexico, the DOJ blasted police for too quickly using flashlights, batons or stun guns as weapons when force could have been avoided.

In Seattle in 2010, an officer killed a Native American woodcarver who had crossed the street while holding a small knife and a block of wood. The officer got out of his car, and when the carver — who turned out to be hard of hearing — didn’t immediately drop the tool as ordered, he was shot.

Like Wilson, the officer wasn’t charged criminally because of the high bar for such prosecutions against police, but the case helped spur the federal civil rights investigation of the department. A consent decree overhauled the department’s training, putting a premium on de-escalation and bias-free policing.

The DOJ has already launched a similar investigation in Ferguson.

In practice, de-escalation can take many forms, said Seattle police spokesman Sean Whitcomb. Sometimes it means that multiple officers respond rather than one, because the larger presence can make excitable subjects realize they’re outnumbered.

But for an officer, it can also mean calmly introducing yourself, listening to what someone is saying and simply relating to the person. The use of body-worn cameras can also help, experts say, because both officers and civilians tend to behave better when they know they’re being recorded.

“If we can use language and presence to get people to comply with lawful orders, we can consider that a win,” Whitcomb said.

Still, reducing tension can be easier said than done. A 2012 report from the Police Executive Research Forum describes challenges in utilizing de-escalation techniques, saying a younger generation of officers accustomed to communicating through email and other electronic media may be less skilled at face-to-face encounters.

And some officers worry about giving away the upper hand.

A group of Seattle police officers sued over the department’s new use-of-force policy. They said while they too want to prevent excessive uses of force, the policy is overly complicated and could endanger officers by requiring them to hesitate before using force. A federal judge dismissed the lawsuit, but the officers have appealed.

“Traditional police training reinforces that you must always display a very strong, assertive presence,” said Sue Rahr, executive director of Washington state’s police academy. “But if the officer reacts to a challenge as most human beings would — by challenging back — the situation is going to devolve.”