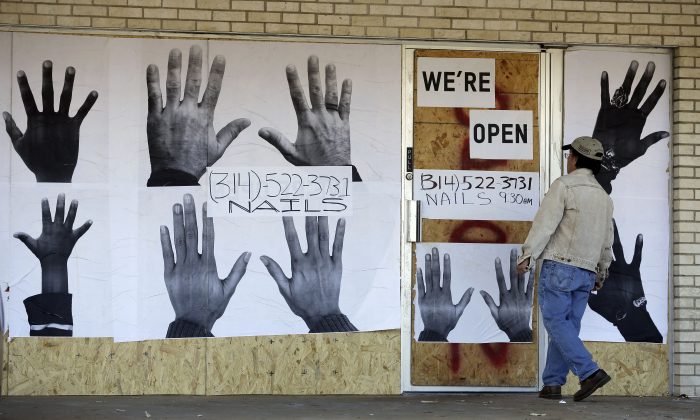 A man who declined to be identified stands outside a boarded up business Thursday, Nov. 20, 2014, in Ferguson, Mo. (AP Photo/Jeff Roberson)
US

At 12:20 p.m. local time, Saint Louis County prosecuting attorney Bob McCulloch’s office sent an email to over 160 reporters telling them to prepare for a press conference announcing the Grand Jury’s decision regarding whether Officer Darren Wilson will be indicted for the murder of 18-year-old Michael Brown. No specific time or location was provided.

Saint Louis County Executive Office also sent out a message for a press conference that will be held at 2:30 p.m. to discuss the agreements law enforcement agencies have been attempting to establish with organized activist. Agreements on conduct for both law enforcement personnel and protesters are being worked on. Hopefully these preventative measures can reduce causalities.

Nearby school districts have cancelled classes in anticipation of the Grand Jury’s decision.

Many shops in the area have boarded up their windows and doors.

Pictures have surfaced of a plywood structure having been constructed around the City of Ferguson Police Department sign.

Being built to keep media from climbing on the sign to take pictures. pic.twitter.com/g7T6cBUo2l