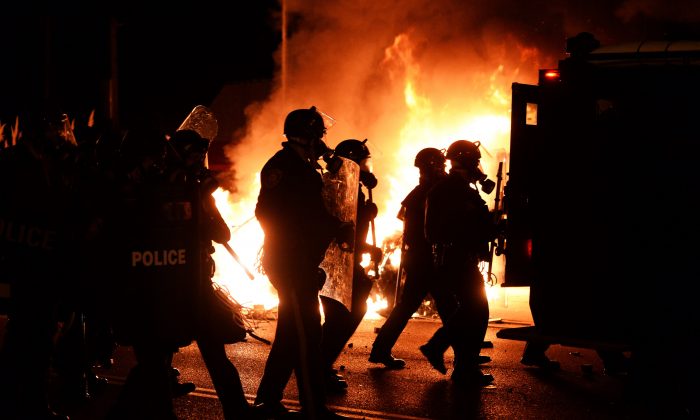 Police chase demonstrators passing a burning police vehicle during clashes between police and protesters over the decision in the shooting death 18-year-old Michael Brown in Ferguson, Missouri, on November 24, 2014. (AFP/Getty Images)
Ferguson

Ferguson Missouri is engulfed in flames as protesters are enraged at the Grand Jury’s decision to not indict Officer Darren Wilson for the fatal shooting of Michael Brown.

After a length preamble that has received a lot of criticism from legal experts, St. Louis County Prosecuting attorney, Bob McCulloch, announced At approximately 8:30 p.m. CST, that Officer Darren Wilson would face no charges in the fatal shooting of teenage college student Michael Brown. It did not take long before the thousand of protesters who have been anxiously awaiting the decision of the Grand Jury to begin smashing windows, looting, and setting trash cans, cop cars and businesses on fire. The ammunition left inside the flaming cop cars can be heard going off as the heat rises.

Police dressed in full riot gear, brandishing shotguns loaded with “sock” or “bean bag” rounds and firing tear gas towards protesters have been trying to disperse the unruly crowds.

St. Louis County Police Department have responded to several reports of gunfire in various locations around the small town of Ferguson.

President Obama made a speech within half an hour of McCulloch announcement urging peace and calm during this tense period and saying that racial issues have made a lot of progress in the last few decades.

McCulloch also promised to make all of the evidence that was shown to the Grand Jury public this evening, there is a lot of information that reporters and private citizens are beginning to comb through.