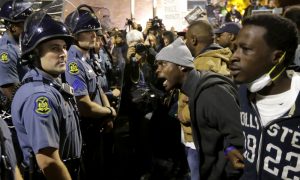 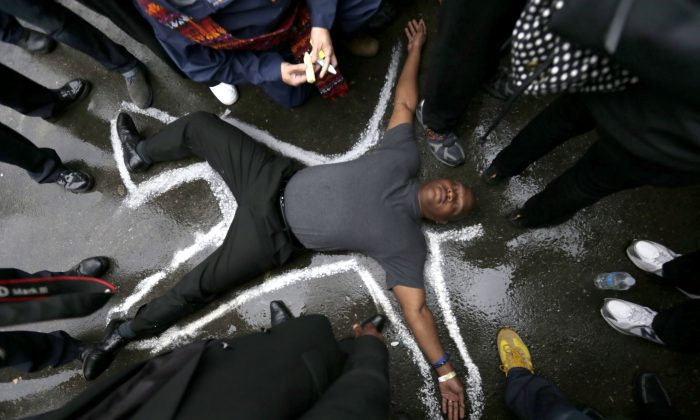 Pastor Charles Burton lies on the driveway at the Ferguson, Mo., police station as a chalk drawing is made as a memorial to Michael Brown, Monday, Oct. 13, 2014. (AP Photo/Charles Rex Arbogast)
US

When the grand jury decision is announced in early November about whether Ferguson police officer Darren Wilson will be indicted in the August shooting death of Michael Brown, police will be armed with more than riot gear. They will also be trained on constitutional rights. St. Louis area officials say they expect the grand jury decision by the first or second week of November.

At the St. Louis County Police Department, an unknown number of police will be part of any Ferguson detail after the decision is announced. Until then, the department’s 840 officers are being trained on the Bill of Rights and more. Other municipalities that will be involved are doing similar training, according to police.

“We recently underwent training that was an extensive review of those rights,” said Sgt. Brian Schellman, St. Louis County Police Department spokesperson. “As we get closer to the grand jury decision, our supervisors will be reiterating those rights as well.”

The four-hour training is focused on the First, Fourth, and 14th Amendments to the Constitution. They include protections for freedom of the press, speech, and assembly, and prohibitions of unreasonable search and seizure, and deprivation of life, liberty, or property without due process.

All trainees are given pocket-sized cards with the amendments as a reminder, though they are not required to carry them.

Schellman said that concerns over unrest over the impending decision is at the heart of the training and they are aiming to have a well-informed force.

“It’s something we will be constantly talking about,” he said of learning to respect those rights.

Though the trainings appear well-intentioned, it may be too little, too late.

On Oct. 27, the U.S. branch of an international freedom of expression group, PEN, sent a report detailing more than four dozen alleged abuses of constitutional rights by police against the media to the Department of Justice (DOJ). Along with the report, PEN has asked the DOJ to initiate an investigation into the allegations and determine whether any disciplinary action is necessary.

“[When] the protests began in August we started noticing more and more reports about press being intimidated,” said Katy Glenn Bass, PEN American Center’s Deputy Director of Free Expression Programs and one of the report’s authors. PEN staff began collecting every scrap of information and evidence available to corroborate the accounts—from social media posts to videos, photographs, and first-hand accounts. Rather than finding multiple accounts of a few specific incidents, Bass said they discovered a broad swath of accounts where the press felt their rights were clearly violated.

“What struck me the most was the variety of the allegations that we were finding,” she said.

They found 52 allegations, to be exact.

Included was threatening conduct by police, the arrest and detention of working journalists, obstruction of access to information, the use of tear gas on the press, and attempts to stop reporters from filming the police. Some of the accounts bordered on life-threatening.

“A number of journalists had a loaded gun pointed at them,” said Bass. “We have several journalists threatened with being shot.”

Surprisingly, Bass said that the events in Ferguson appear to be part of a larger national trend of the rights of the press being violated.

“I think you need to really be vigilant in protecting these rights—it’s the same for every constitutional right. I think there’s been a troubling trend in the last few years.”

For Bass, it’s all part of the larger picture that the public has to be vigilant about protecting its constitutional rights to information, particularly when it comes to the activities of the police.

“Freedom of the press is never something you can take for granted,” she said.

But Joseph Larsen, special counsel with Sedgwick LLP, said in a case like Ferguson the police can claim reporters were too close and got in the way. Citizens are only within the bounds of their constitutional rights in regards to documenting police at work if it doesn’t impede their ability to do their jobs.

Larsen, who specializes in First Amendment law and sits on the board of the Freedom of Information Foundation of Texas, also pointed out that allegations of police misconduct can be struck down in court.

From the perspective of the police, though, having a lack of experience dealing with an unruly crowd can be fearsome.

In 1993, former Dallas Police Department tactical team member Mike Witzgall found himself at the center of a massive riot of hundreds of thousands of people with numerous flashpoints erupting simultaneously. The riot broke out during a parade for the 1993 Superbowl.

“The thing with Ferguson—they kept talking about show of force,” said Witzgall, who is now a nationally sought-after tactical law enforcement trainer. “I’ve jumped out of plane, swam with sharks, been shot at, and that riot was the most terrifying thing I’ve ever seen.”

Witzgall said that most police forces aren’t experienced at handling riots, as evidenced by the numerous requests he says he’s gotten since August from across the country for training on crowd control. For police, an unpredictable and volatile crowd can be life-threatening.

Witzgall also passionately argues that there is “no militarization” of American police forces, and taking advantage of items like armored vehicles from overstocked military equipment is essential for the safety of a police force.

Since August, though, the St. Louis County Police Department has spent a small fortune on tactical gear. By the department’s own account, they have spent $122,668 on a range of equipment. That includes $2,323 for for 2,000 plastic handcuffs. In October alone, they spent $37,741 on helmets, shields, batons, and shin guards. They’ve spent tens of thousands more on pepper balls, smoke cans and stun grenades.

At Freedom House, where they have tallied a global press freedom index since 1980, the situation for media in the U.S. comes down to simple math. Every country they analyze is assigned an index number. The lower the number, the more free the country is. Over the past few years, America’s number has steadily gotten larger.

“There has been a worrying decline in freedom in the U.S.,” said Karin Karlekar, project director of Freedom House’s press freedom report. The report assigns a number to each country’s legal, political, and economic environment as it relates to the media and the tally becomes the index number.

Karlekar said that Freedom House’s greatest concern, though, is over the national trend of punitive legal action against journalists. To this day, legislation that protects journalists only exists in some cases at the state level.
“Things that happened in Ferguson have happened on and off in the U.S.,” she said. “We did see it with Occupy and we saw it with Ferguson. A potentially more systemic issue is prosecutions or threats to prosecute journalists who are trying to report on national security or covering whistleblowers.”

She said that under the Obama administration, there have been about nine cases of such prosecutions.

“It’s more cases than under previous administration combined,” she said, and added that Obama himself “seems to regard the media as a threat.”

“Overall the U.S. has a relatively open media environment, but this has been a worrying trend.”