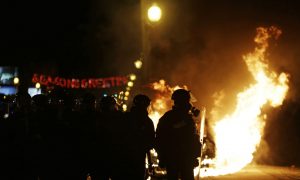 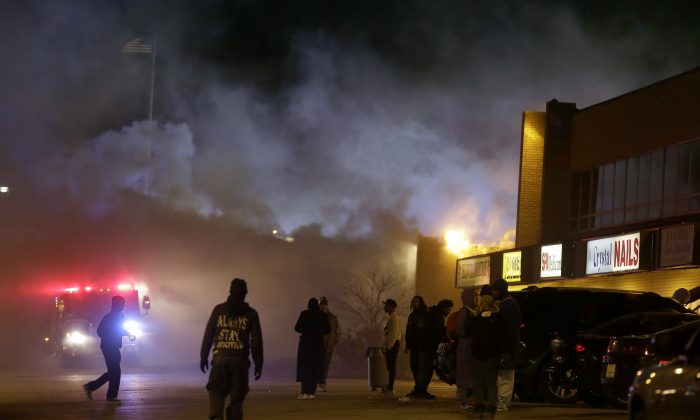 Smoke fills the streets as some buildings are on fire after the announcement of the grand jury decision Monday, Nov. 24, 2014, in Ferguson, Mo. A grand jury has decided not to indict Ferguson police officer Darren Wilson in the death of Michael Brown, the unarmed, black 18-year-old whose fatal shooting sparked sometimes violent protests. (AP Photo/Jeff Roberson)
Ferguson

A no fly zone has been instituted above and around Ferguson, Missouri while reports are emerging that area airports are being shut down.

The Federal Aviation Administration announced the no fly zone after the grand jury decision came through on Monday night in the Michael Brown shooting.

Listed under the reason for the no fly zone, the agency put: “To provide a safe environment for law enforcement activities.” It later said that the decision stemmed partially from reports of gunshots being fired into the sky.

The prohibited airspace is designated as three nautical miles around Ferguson.

For two weeks after the August shooting, the FAA restricted flights on 37 square miles of airspace, including for news helicopters. The FAA says media aircraft currently are flying just above the flight restriction zone over Ferguson.

Meanwhile, reports are emerging that the St. Louis airport is partially closed because of trouble there related to Ferguson.

Tim Ryan of 9News in Denver, who is on board a flight from Denver to St. Louis, said his plane was turned back.

“The pilot announced STL airport closing due to trouble in St Louis. Returning to DIA,” he said.

The partial airport closing was confirmed by other Twitter users, including a political aide who spoke with officials into Houston.

However, the airport itself said via Twitter that outbound flights are not affected.

It’s unclear at the moment if any other area airports are impacted by what’s happening.

There is no airport in Ferguson.