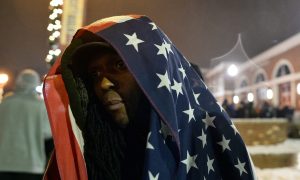 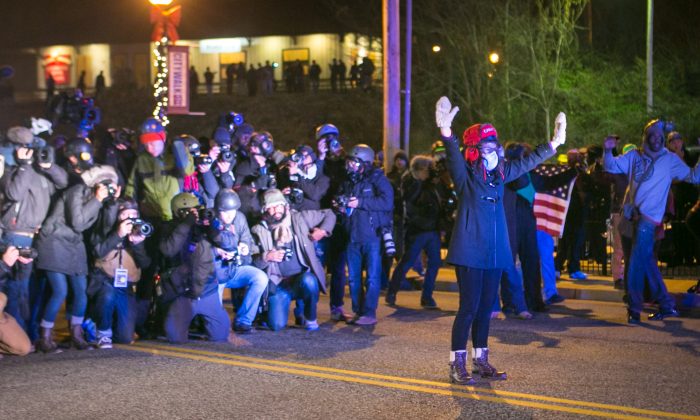 A lone woman stands with her hands up in front of the police making an announcement for her to leave the street, as media take shots of her from behind, in Ferguson, Mo., on Nov. 25, 2014. (Benjamin Chasteen/Epoch Times)
Ferguson

Activists in Ferguson were dealt a double-edged sword of justice this week with twin judgments from the U.S. Department of Justice. The end of a months-long investigation, one conclusion of the federal agency was that the Missouri town engages in policing tactics that are racially biased against blacks in the area.

The other announcement was the DOJ’s decision not to prosecute the white former police officer Darren Wilson in the high-profile August 2014 shooting death of a black man, Michael Brown.

Both drew ire of different kinds from activists: the first for stating what is considered obvious by activists who have sustained months of protests; the second for being the culminating disappointment in a legal process for retribution that has been perceived as anything but color blind.

At the time of a St. Louis County grand jury decision not to indict Wilson in November 2014, some activists had high hopes that the federal response would deliver a heavy hammer of fear, even if it didn’t result in a legal punishment. Wilson’s non-indictment at the local level sparked massive nationwide protests and violent looting and burning of Ferguson businesses.

There were also massive local protests for several nights that descended into angry confrontations between the police and protesters.

On Wednesday, some of the most high-profile activists within the loosely organized network of community members, students, and civil rights advocates were busy pushing a message with a tone akin to incredulous indignation.

Social media—primarily Twitter—has long been the medium of choice for Ferguson-related commentary and communication within this particular activist community. Coupled with information gleaned from live feeds of people streaming video at protests sites, Twitter has served as a primary platform for passing messages, protest locations, incidents, news, and updates among a group that can barely be defined as such. There are no official leaders, formal organization, or even general structure.

When it comes to Ferguson, those who are most active on the streets and on social media have generally emerged as de facto leaders.

DeRay McKesson, one of the few people who has been interviewed and featured by several media outlets in past months, also took to Twitter on Wednesday to express his opinion about the outcome.

“Bob McCulloch is Jim Crow,” he stated simply, referring to the prosecuting attorney for St. Louis County who has been a central figure in the legal proceedings related to the shooting of Brown and the subsequent grand jury proceedings.

McCulloch is widely viewed with skepticism and sometimes outright disgust among activists who have protested over incidents in Ferguson.

Brown family lawyer Benjamin Crump told The Associated Press that the family was not surprised, but was very disappointed. One of Brown’s uncles, Charles Ewing, said he believed Wilson was “getting away with it.”

“I really was hoping they would have come up with better findings because this whole thing just does not add up,” Ewing said. “Everything just doesn’t make sense.”