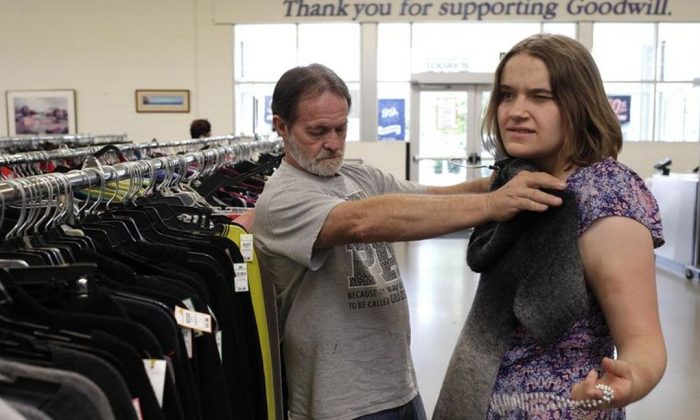 In a Sept. 23, 2017 photo, Bernie Lierow picks out a new sweater for his daughter, Danielle "Dani" Lierow, during a nineteenth birthday outing in Murfreesboro, Tenn. Danielle was found by police in the back of a run-down house in Plant City, Fla. (Laura Cerri/Tampa Bay Times via AP)
Trending

A girl who was locked up by her mother inside their home for the first six years of her life couldn’t eat, read, or write. A detective who discovered her said it was the worst case of child abuse he’d seen in decades on the job.

The girl, named Danielle Crockett, or Dani, was discovered by a Florida detective who responded to a child abuse report in July 2005, reported the Tampa Bay Times. The official, Mark Holste, said that someone saw the girl looking out a broken window.

When officers arrived on the scene, they found a room filled with filth, insects, and other types of refuse.

She was a feral child, neglected beyond belief in a Tampa Bay area home. Ten years ago, she was adopted by a family that…

Dani, who was 6 at the time, was discovered on a mold-covered mattress with lice, flies, and maggots covering her.

Her case was the “the worst neglect situation I’ve ever seen,” Holste said, according to a Daily Mail writeup of the Times’ feature, which reported that her birthday is in September. He said the smell inside the home made him sick, CBN reported, which described her as a “true feral child.”

“I’ve been in law enforcement for 27 years now, and this is by far … the worst, added Holste in the CBN video.

After some time, detectives determined she was nearly 7 years old and was “kept behind a closed door, in a space the size of a walk-in closet, alone in the dark,” reported the Times.

Michelle Crockett, a single mother, was arrested and told officials she did the best she could. Three years after her daughter was found in squalid conditions, she waived her right as a parent and got only sentenced to two years of house arrest, reported The Associated Press.

After that, Dani was taken in by child services and she hospitalized for about six weeks, and she could only use a bottle.

“We did genetic tests, neurological scans. There was nothing wrong with her. But she wasn’t stimulated at all,” Kathleen Armstrong of the University of South Florida told the Times. “I’d been a school psychologist for 20 years, but I’d never seen a child like Dani.”

Before the 2005 incident, someone called to report seeing a naked, starving girl in. Social workers offered to help Crockett, but she refused and they left her in her custody.

She didn't see the sun or eat solid food for the first SEVEN years of her life.

‘You Definitely Don’t Want Her’

Two years after she was rescued, Dani was adopted by Bernie and Diane Lierow, who told the Times that they wanted a daughter and thought God placed her in their lives. “She just looked like she needed us,” Bernie said.

They had first met with an adoption agency about Dani. “All they would say was ‘you definitely don’t want her,’” said Bernie in the CBN video. But, according to Dianne, “I just felt drawn to her.”

”Eventually one of the ladies told my wife; ‘there’s something wrong with her, that girl isn’t suitable for adoption,’” Bernie said.

But despite the warnings, they took her in.

“We didn’t know if she’d ever eat with a fork and a spoon,” Dianne said. “You start to think: I don’t know how far this child is going to go.”

Dani had screaming fits several times per day and didn’t want to go outside, owing to the fact that she was kept inside for years, according to the CBN report.

According to the Mail article, the Lierows had to potty-train Dani and teach her other basic developmental things that infants learn. “She can go to the cupboard, get a glass and get herself a drink of water. And she’s much more open; she will look at people now, and sometimes she will go to people she doesn’t know that well,” they told the Daily Mail.

However, raising Dani apparently took a toll on their marriage, and they got divorced in 2015, according to Bernie. Dianne wouldn’t speak to the Times about the girl.

“When I got Dani with just me, she really relaxed,” Bernie told the Mail. “But I couldn’t work at all during summers. And then there were those times with the cops.” There were two incidents where police were called about how she was behaving in public.

“It’s one thing for a man to take his 9-year-old daughter to the men’s room. Or to carry a 12-year-old off from a carnival, screaming. But when she’s 17 and weighs 40 pounds more than her dad, and still needs help with her diaper, and won’t always walk to the car, things get murkier,” the Times reported, adding that during another time, she “started thrashing around in the backseat, banging on the windows” before a police officer “pulled him over and asked what kind of drugs he had her on.”

“I finally had to admit: God, this is a little too much for me,” he told the Mail.

When police finally rescued the seven-year-old girl, she was wearing a nappy, couldn't talk or feed herself, and had never been outdoors. her mother's response to how this could happen shook investigators.

When she turned 18, Dani became eligible for Medicare and Social Security. She was then sent to a group home near Nashville, Tennessee, near where Bernie lived. According to the Times, Dianne lives in Carthage, about one hour from Dani.

Now, Bernie said, she has shown improvements and is more compliant. However, she still can’t speak or write.

And despite all the tribulations, Bernie said he would still have taken her in.

“It makes me so glad we could give her a home and a family to grow up in,” he was quoted by the Mail as saying. “The biggest things I gave her were love and respect.”

Bernie and Diane decided to adopt a young girl despite people’s warnings. Even after being told the truth behind her…

In 2017, The Associated Press reported on the girl’s 19th birthday, saying that Holste checked in with Bernie at least once a year. He retired two years ago, after 29 years on the force. He said Dani showed him how important it is to interact with your children during the early years. “I’m a single dad. I retired when my son was 8.”

The Plant City house where Dani lived with her birth mother is gone. The city tore it down a couple of years ago. Michelle Crockett lives in a trailer nearby. She didn’t want to talk about Dani for this story. When I went to see her, she threatened to call police.

Bernie said he tries to see Dani every month. He’s been her only visitor. He’s not nearly as exhausted now, he said. Despite the gray in his beard, he looks 10 years younger. But he misses Dani pulling him around while he feeds the goats, leaning on his shoulder while they watch Alvin and the Chipmunks, AP reported.

“I took care of her as long as I could, because that was my job. The Lord gave her to me,” Bernie said. “But just as I was wishing he would come down here and help me out a bit, he found this place for her. For us.”