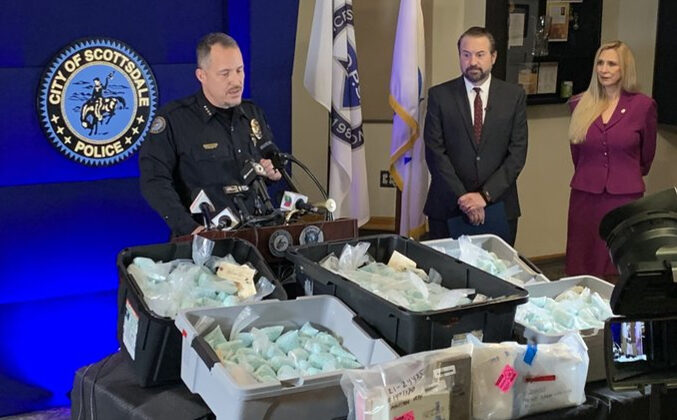 L-R: Scottsdale Police Chief Jeff Walther in front of a display of illicit fentanyl-laced pills and other narcotics; Arizona Attorney General Mark Brnovich, and Cheri Oz, special agent in charge of the DEA’s Phoenix field division at a press conference in Scottsdale, Ariz., on Dec. 16, 2021. (Scottsdale PD)
By Charlotte Cuthbertson

Fentanyl-related drug overdoses in 2020 became the top killer in adults aged 18 to 45—overtaking suicide, vehicle accidents, and gun violence, according to an analysis of Centers for Disease Control and Prevention data by nonprofit group Families Against Fentanyl.

Fentanyl is a synthetic opioid that’s 50 to 100 times more potent than morphine, highly addictive, and deadly. Buyers may be unaware that the drugs they buy contain illicit fentanyl, a 2 milligram dose of which can be fatal.

The substance is most often manufactured in Mexico using chemicals supplied from China and trafficked across the southern border by Mexican drug cartels. Fentanyl is mixed with other narcotics to increase potency as well as pressed into counterfeit pain pills that are made to look like blue Oxycodone prescription pills and are commonly known as “Mexican oxys.”

Families Against Fentanyl is advocating for the U.S. government to designate fentanyl and its analogs as a weapon of mass destruction under federal statute.

The statute defines “weapon of mass destruction,” in part, as “any weapon that is designed or intended to cause death or serious bodily injury through the release, dissemination, or impact of toxin or poisonous chemicals, or their precursors.”

More than 100,000 Americans, a record amount, died of drug overdoses in the 12-month period ending in April, according to CDC data. Fentanyl was involved in almost two-thirds of those deaths.

During 2020, as lockdowns became prolonged and widespread as a response to the pandemic, overdose fatalities accelerated.

“This represents a worsening of the drug overdose epidemic in the United States,” the CDC stated in an emergency health advisory issued more than a year ago, on Dec. 17, 2020.

An analysis by the Well Being Trust in May 2020 estimated a possible 75,000 additional “deaths of despair,” including suicide as well as drug and alcohol abuse over the ensuing several years, due to the shutdown measures.

This year, as the southern border became more porous, record amounts of drugs have been seized by authorities.

During fiscal year 2021, which ended in September, Customs and Border Protection confiscated 11,200 pounds of fentanyl, up from 2,150 pounds the year prior.

In addition, the Drug Enforcement Administration (DEA) seized a record-breaking more than 20 million counterfeit pills containing fentanyl this year, according to Cheri Oz, DEA special agent in charge of the Phoenix field division.

Almost half of those were seized in Arizona, she said.

“The Sinaloa Cartel primarily uses the trafficking routes that run through Arizona,” Oz said during a Dec. 16 press conference. “Phoenix is historically known as a repackaging and distribution area.”

At the press conference, Oz announced the results of a two-month joint DEA and local Scottsdale, Arizona, drug trafficking operation run by the Sinaloa Cartel.

“In total during the two-month surge, we seized 3 million pills, 45 kilos of fentanyl powder, over 35 firearms, and arrested over 40 drug traffickers,” she said.

“Traffickers are using technology to get into your homes and sell pills to your children and loved ones,” Oz said. “Watch their social media and educate yourselves on the dangers and lingo of the online emojis being used.”

Scottsdale Police Chief Jeff Walther said, “It’s not just a drug,” it’s an “intended destabilizing influence in our country” wrought by the cartels and their partners.

“And if those across the border can continue to push this destabilizing influence in our country, we’re going to continue to see … these record numbers of seizures, because this is just flowing like a river into Arizona and then it has tendrils that go around the country,” Walther said during the press conference.

Congress has failed to pass legislation that would designate Mexican drug cartels as foreign terrorist organizations.