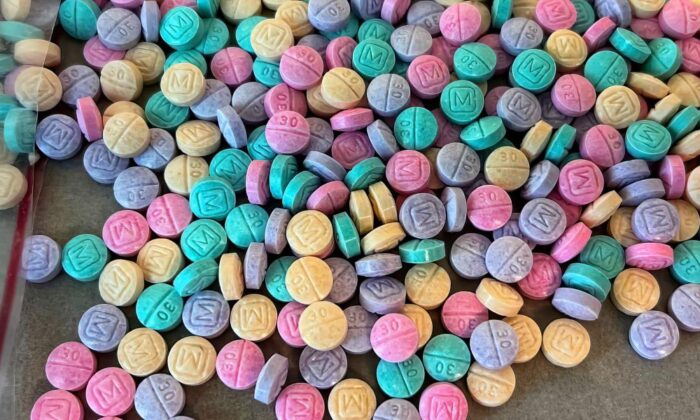 It only takes a quick scroll through the Facebook group “Lost Voices of Fentanyl” to see the wake of devastation that illicit fentanyl is leaving behind.

The public group, which has more than 19,000 members and grows daily, is full of the faces of lost loved ones and grieving family members trying to contend with the pain.

If that’s not enough, parents are trying to understand autopsy and toxicology reports, figuring out how to obtain a copy of a 911 call, and seeking advice on how to ensure that drug dealers receive justice.

Many children are dying after taking a pill that they think is a prescription painkiller such as OxyContin or Percocet. Others think they’re taking the prescription drug Adderall.

“When these kids are buying Xanax, they think, ‘Well, it’s no big deal. Mom and Dad get it prescribed, what’s the big deal?’” said April Babcock, who started “Lost Voices of Fentanyl” in 2020.

In reality, America is flooded with lookalike pills that contain deadly doses of fentanyl, a synthetic opioid that was originally developed as a painkiller and anesthetic. It’s 50 to 100 times more potent than heroin, and just 2 milligrams can be fatal.

Grieving family members say fentanyl isn’t a drug—it’s a poison. And Mexican drug cartels are bringing it into the country via the U.S.–Mexico border.

Babcock said the term “overdose” is obsolete in the case of illicit drugs.

“The term overdose means there’s a safe dose to take, and you took too much. There’s no safe dose of illicit fentanyl,” she said.

Babcock’s son Austen died in 2019 after he bought some cocaine, not knowing it was laced with fentanyl.

“That’s a deception. [He] didn’t die from cocaine. He died from fentanyl, and there is no safe dose,” she said.

“When you go out and you buy a Xanax or you buy an Adderall or anything, but you’re dying from fentanyl, that’s a deception. These kids are being deceived. And they’re being poisoned to death.”

Babcock originally created the Facebook page for a rally she held at the Chinese Embassy in Washington last year. She wanted to raise awareness that the precursors and analogs to fentanyl were being shipped from China to the cartels in Mexico, where they were subsequently pressed into counterfeit pills or mixed into heroin, cocaine, and even marijuana.

In August 2019, the Mexican navy intercepted a 25-ton shipload of fentanyl originating from China and bound for Culiacán, Sinaloa—the home base of the Sinaloa cartel in Mexico.

Fentanyl also is an extremely lucrative drug. One kilogram of fentanyl costs about $5,000 in China. If the cartels take that kilogram into their labs and cut it with other drugs or press it into pills, they can make $2 million or more by then selling it on American streets.

While scientists measure fentanyl by the microgram for hospital use, drug dealers and cartel members aren’t as precise.

“The parents in my group with dead kids that are young, so many of their [children] bought their drug on Snapchat. It’s a fake pill, and they’re finding their kids dead in their bedrooms. That’s not normal.”

Babcock said America’s youth are being targeted through social media and the colorful candy-like pills laced with fentanyl.

“It actually breaks my heart because I know, today, 300 other parents are going to be me. And that’s really why I do everything I do—because I can’t bring my son back. My goal is to save another family from going through this,” she said.

“It’s bad enough when you have people dying that have a substance use disorder—that’s a nightmare on its own—but now we have an entirely new demographic of people that are dying. These are first-time and experimental users, and even occasional users, because, let’s get real, people occasionally use drugs who aren’t drug addicts.

“I’m not saying it’s right to use drugs—all I’m saying is now people are instantly dying.”

On Sept. 17, Babcock is hoping hundreds of people will join her rally in front of the White House. She’s calling on the federal government for an awareness campaign around fentanyl as broad as it was for COVID-19.

“We’re almost 10 years deep into this crisis. Where’s the public awareness campaign? Within three months of COVID, every single American 3 years old and up knew ‘social distance, wash your hands, wear a mask,'” she said.

During 2020, major news networks pinned a ticker on their screens that displayed the total number of cases and deaths in which COVID-19 was reported as a factor.

“I shouldn’t have to be holding a rally in front of the White House. I should be able to memorialize my child and have memorial events,” Babcock said.

But she’s determined to warn the public about fentanyl.

“From what I’m hearing, the life expectancy of someone addicted to illicit fentanyl is about three years,” she said.